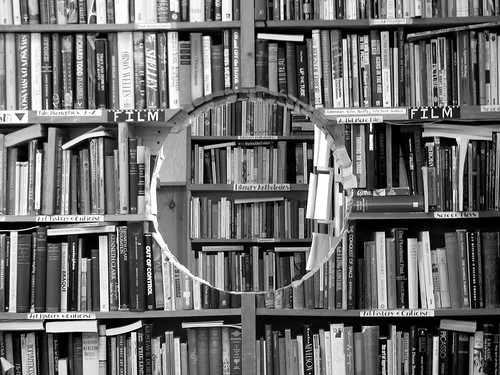 I like the Dickensian, the Kafkaesque, the Pirenesian, the Joycean as much as the next person. Yes, I live in a Cornell Box and Yes, I am a member of the Juxtapositionist League of America. But taxonomy is fun too and so we like to classify and reclassify and make little signs. Unfortunately I do have the 'gift of acquisition' and thus the piles of extras tend to obscure the organization, especially for the cursory customers, such as our Slicker persona above.

Not dark, maybe dusty but not musty. And people do regularly find what they are looking for or the shop would be gone by now : serendipity won't pay the bills.

Schooner Books, in Halifax (5378 Inglis Street, ph. 902-423- 8419), is to be blamed for my career choice. That shop, run by the most excellent and personable team of John Townsend and Mary Lee MacDonald, gave me an invaluable apprenticeship. I was actually *allowed* to work there (despite my untidy tendencies) part-time and full-time for 7 years. I say "allowed", because this was my hobby, my main earthly delight. How could it be that I was actually being paid to be among books, wonderful books, buyable books all day. Wow!!!

I began my own shop in June of 1987. (The date is not hard one for me to remember as my son was born that same very busy week). The business opened rather recklessly with only 200 or so books arranged on the middle-level shelves of a 16 foot high room, in downtown Halifax. Decent books but not very many of them and that was my worry. But God in His providence arranged that our previous location (on Granville Street) would be one of those abhorred-by-nature book-vacuums and thus it is that we have a stock aplenty.

On the personnel side,  Ferne Welsman, Sydney Hansen, Jane Kansas, Jane Sodero, Jacob Smith and myself are the current staff.