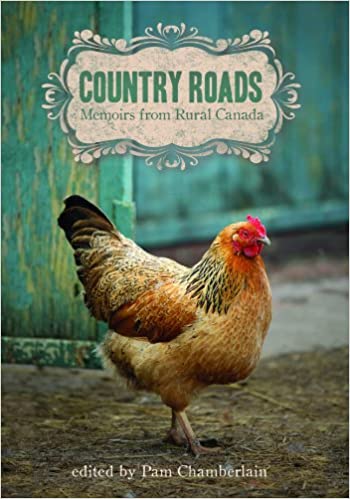 Pam Chamberlain (b. 1970, Alberta) was living in Calgary at the time of publication

“In Country Roads, writers from Victoria, BC, to St. John's, Newfoundland, reflect upon their experiences growing up in rural Canada. The anthology includes award-winning authors like Wayne Johnston, Roch Carrier, Sharon Butala, and Rudy Wiebe, in addition to well-known Canadians such as Senator Pamela Wallin, NHL coach Brent Sutter, and artist and actor Gordon Tootoosis.

Some who grew up in the country equate their rural communities with a sense of belonging, while others only recall hardship. Some grew up loving their small towns and never wanted to leave. Others couldn't wait to escape to the city. But the writers in this collection share one thing in common: they were all country kids whose upbringing profoundly shaped their identities. The thirty-four memoirs in Country Roads are sometimes humorous, sometimes heartbreaking, but always engaging.”


Part I. Home.
Landing by Luanne Armstrong.
The Place I Call Home by Laura Best.
The Centre of the Universe by Pamela Wallin.
A Solid Foundation by Kay Parley.
Valley Girl by Shirlee Smith Matheson.
Wave Riders by N.J. Brown.
Marlborough Township by Joyce Glasner.
The Goulds by Wayne Johnston (pp.65-68).
Awakened by Stars by Sharon Butala.
Road Trip: Why I Write about Saskatchewan by Shelley A. Leedahl.

There Isn't One Thing I'd Change by Brent Sutter, with Andrew Leitch.

Coming Home by Gordon Tootoosis, with Pam Chamberlain.
Guardian Angels by Catherine R. Fenwick.
Believe It or Not by Pamela Banting.
Down to the Ice by Keith Collier.
Farm Kid by Rose-Marie Lohnes.
I Am... a Farmer by Marianne Stamm.
Going Malting by Janice Acton.

Harvest Moon by Wayne Curtis (pp.217-225).
Grandpa and Me by Chris Beingessner.
A Secret Lost in the Water by Roch Carrier.
The Apple Branch by Leah Benvie Hamilton.
The Brook by David Weale (pp.243-245).
A Country Song Played Backward by Jill Sexsmith.

Departure and the Eternal Return: Imprints of a Country Childhood by Marianne Ackerman.