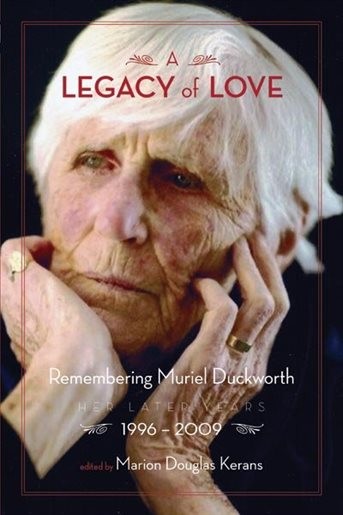 Marion Douglas Kerans was living in Ottawa at the time of publication.

Muriel Duckworth was a Canadian pacifist, feminist and social and community activist. She was a practising Quaker, a religious denomination committed to non-violence. Duckworth maintained that war with its systematic violence against women and children is a major obstacle to social justice. Duckworth was a founding member of the Nova Scotia Voice of Women, a provincial branch of the national peace organization called the Voice of Women (VOW).Duckworth was the first woman in Halifax to run for a seat in the Nova Scotia legislature. She also led community organizing efforts seeking improvements in education, housing, social assistance and municipal planning.In her later years, Duckworth performed with the Halifax chapter of the Raging Grannies, a group that composes and sings satirical ballads promoting social justice.

"Muriel passed away on August 22, 2009 in her one hundred and first year. In the weeks that followed, memorial services were held in Austin Quebec, Halifax, Montréal, Ottawa, Toronto and Vancouver. People from across Canada recognized that her passing marked the end of an era, and they wanted not only to remember her but to come together to be a part of her ongoing legacy of love. This book brings together stories from Muriel’s family and close friends from the past dozen years of her life. It is a collection of heartfelt tales of Muriel’s ability to reach out to people, her humour, her deep affection for her family, her ongoing activism and enduring political feistiness, her views on education, religion, death, war and love. The book is richly illustrated with photographs from Muriel’s later years." - rear.

Introduction.
Tributes to Muriel.
A Celebration of Muriel's 100th Birthday.
Who and What Kept Muriel Going.
Aging and Home Care.
Muriel's Influence on Friends of Every Age.
Family Memories of Muriel.
Eulogies for Muriel from across the Country.
Epilogue.