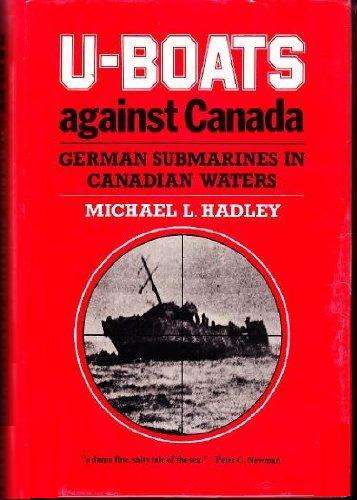 The U-boats constituted a serious threat to North American security and a major challenge to coastal and convoy defence. The deployment of minesweepers and escorts, the placement of harbour defences, and the planning of convoy routes were triggered by genuine fears that Halifax, St John's, and inland ports and convoys on the St Lawrence might be blockaded or even attacked by one of these most sinister of maritime weapons. German successes reveal the extent of Canada's unpreparedness.

Hadley focuses on the exploits of the U-boats and the Canadian response, setting them within the broad context of German and Canadian activity in the Battle of the Atlantic. He examines the impact of U-boat sorties on Canadian federal politics. His book is based on thorough analysis of U-boat War Diaries; the War Diaries of Admiral Dönitz and the German Naval War Office; the operational records of the Royal Canadian Navy and Air Force and those of the Royal Navy's Operational Intelligence Centre; and the espionage files of the Royal Canadian Mounted Police.

He covers all attacks on Allied warships and merchantmen in Canadian inshore waters and the contiguous Northwest Atlantic combat zone. The human dimensions in this story of ships and strategies emerge in excerpts from unpublished memoirs and wartime German and Canadian newspapers, and especially from correspondence and interviews with survivors from both sides." - from the dj.