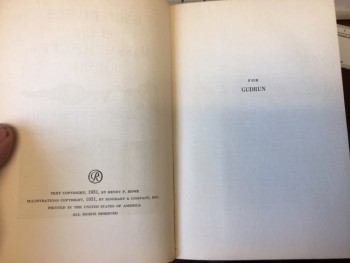 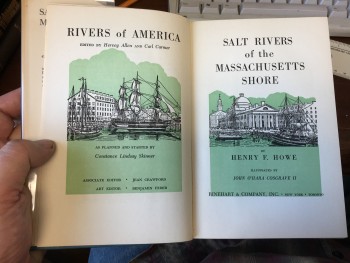 No. 45 in the Rivers of America series.

Fitzgerald, The Rivers of America: A Descriptive Bibliography , S39.

"In the nearly thirty little rivers which indent the Massachusetts shore line from Dartmouth up to Cape Ann lies a force which shaped the history of the state itself and much of the history of our country. Negligible in size, none navigable for more than ten miles, these streams, with no power to lure westward as the big rivers did, demanded and made a way of life. The soil on their shores was rocky and unsuited to agriculture, but these creeks and streams were strong enough to turn millwheels and in the early years, big enough to make the settlers turn to boats rather than roads. So the newcomers from England were forced into commerce and industry by the seemingly inadequate waters that flow into Buzzards Bay, Plymouth Bay, and the drowned valley of Boston Bay.

About the rivers Dr. Howe has woven a fascinating history of eastern Massachusetts, tracing the development of the democratic town meeting from the stiff-necked theocracy of the Bible Commonwealth, the growth of primary education from its early beginnings here, the seeds and flower of revolution (including the most interesting story of the Revolution at sea), the halcyon days of Yankee commerce, and finally the appearance of Massachusetts' provincialism, which was paralleled by strong cultural and scientific activities that meant much to the nation as a whole." - from the jacket [NOTE: the jacket is not present with this copy].