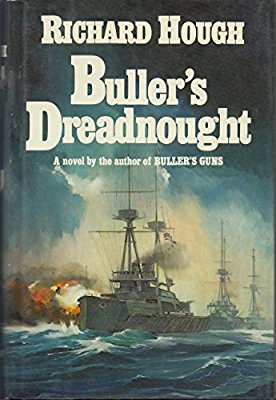 “This extraordinary, action-packed adventure novel is concerned with those crucial years early in the twentieth century when the Royal Navy was transformed from an enormous but decadent service to a finely honed modern fighting force. With Commander Whitney Campbell of the United States Navy, in May 1905, Archy Buller and Rod Maclewin participate as official observers in the incredible Japanese defeat of the Russian Fleet at Tsushima. Later they become deeply involved in subtle espionage activities to determine the size and capabilities of the guns on the new ships of the Imperial German Navy. Of greater importance is their assignment to persuade the Germans to underestimate the firepower of the great naval guns of the British Fleet.

The careers of Buller and Maclewin, and their growing friendship, are presented against the dramas, crises, storms, and battles in which the Royal Navy is engaged. Buller's Dreadnought is an immensely readable and exciting novel displaying Mr. Hough's unusual knowledge of the subject. ” - from the dj.