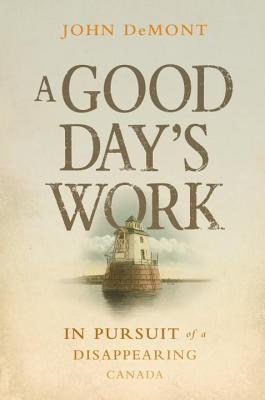 A Good Day's Work : In Pursuit of a Disappearing Canada. First Edition in dustjacket.

"'A Good Day's Work' is a lyrical journey through the Canada of our imagination. The Canada of the day before yesterday. The Canada, perhaps, of 1967 - the country's 'last good year', in the words of Pierre Berton.

This is a panoramic view of that far-off land, captured by way of encounters with a blacksmith, a cowgirl, a milkman, a travelling salesman and other custodians of trades from another time. Woven into those stories - which are sometimes strange, sometimes moving, frequently funny, and always engrossing - are the observations and personal reflections of that wonderful writer John DeMont (who as a [Halifax] newspaper reporter and columnist is something of a vanishing tradesman himself).

The iconic Canada - the Canada of the day before yesterday - is a semi-mythological land. But the peoplwe still living there are very real.

Our country is rapidly changing. The Canada of close-knit small towns, of common geography and history, of meaningful work and communal values and institutions, is becoming less and less a reality.

A Good Day's Work is a panoramic view of that Canada, captured in the stories of people who still make their living the old way, and in the prose of one of Canada's finest writers." - from the dustjacket.

Prologue;
1. Across This Land [the railways];

5. Every Jeselly One of Them [Paul MacNeill, Montague, Prince Edward Island, newspapers, the Eastern Graphic, &c];

7. Reading the Grass [near Hanna, Alberta];

10. A Trick of the Light [Christine Curtis, and the lighthouse of Dawson Island, British Columbia].

Title: A Good Day's Work : In Pursuit of a Disappearing Canada. First Edition in dustjacket.

A Good Day's Work : In Pursuit of a Disappearing Canada. First Edition in dustjacket.