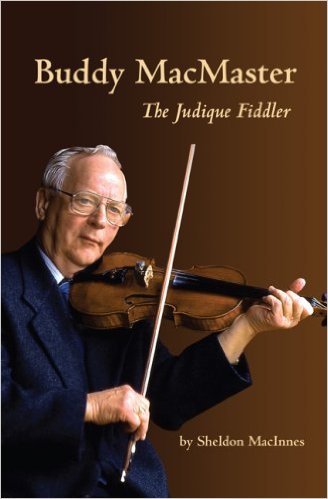 MacINNES, Sheldon. Buddy MacMaster : The Judique Fiddler. Lawrencetown Beach, Nova Scotia, Canada : Pottersfield Press, (2007). First Edition. Pp (6),7-190,(2). With 38 b&w photos. 8vo, photo-illustrated brown card covers. Hugh Alan "Buddy" MacMaster, CM ONS (b. October 18, 1924, Timmins, Ontario, Canada - d. August 20, 2014, Judique, Nova Scotia). “Buddy MacMaster, the renowned Cape Breton fiddler, grew up in Judique, Inverness County. He was influenced by some of the giants in the music at that time like Bill Lamey, "Little" Jack MacDonald, Angus Chisholm and Mary MacDonald. In 1949, Buddy began performing at local square dances. By the mid-1960s, Buddy was making regular appearances at dances in Canada and the U.S. that contributed to sustaining the old-time music and the dance tradition. He developed a reputation as a master fiddler and made his first visit to Scotland to perform in 1970. Through more than 70 years in music, he has travelled extensively to perform and record. His most recent recording was with his niece, the popular Natalie MacMaster. He has received numerous awards for his service to community and culture, including the Order of Canada and the Order of Nova Scotia as well as honorary degrees from St. Francis Xavier University and Cape Breton University. Buddy's music adheres to the Gaelic fiddle tradition that he cherishes as much as life itself. The story highlights his devotion to family, faith and community, as well as to his music. He is seen at home, at school, on the farm, and at the CNR where he worked for 45 years. The book looks at his visits to Scotland, the land of his ancestors, as well his visits to American-style music camps and festivals. The legend of Buddy MacMaster is also presented in accounts from many friends, relatives and musicians.” - from the back cover. The chapters [un-numbered in the book) are:1. Four on the Floor; 2. Centre Stage ; 3. In Tune with Faith; 4. Judique - Fair is the Place; 5. A People's Passion; 6. The Family Circle; 7. The Farm; 8. The Farm Fades; 9. The Ring; 10. Spirits of the Time; 11. King of the Jig; 12. Home and Community; 13. Musical Influences; 14. Hit the Road; 15. The Mentor; 16. Defining Tradition; 17. Accolades. With chronology and references. Very good. 14.00