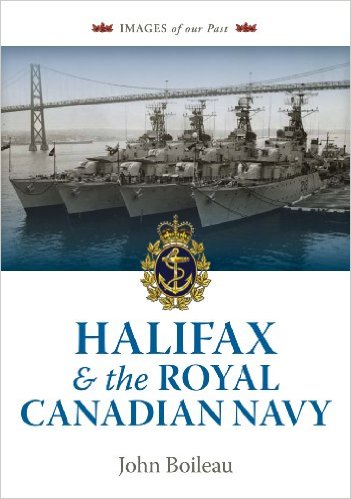 By: BOILEAU, John Images of our Past series)

A volume in the Images Of Our Past series.
An ampersand is used in the title.

"On May 4, 1910, the Liberal government of Sir Wilfrid Laurier passed the Naval Service Act, which created the Royal Canadian Navy (RCN). Evere since, the RCN and the city of Halifax -- a strategic Canadian port on the Atlantic -- have been partenrs. During the Second World War's Battle of the Atlantic, Halifax was a major centre of operations for the RCN, which was tasked with the crucial missions of escorting merchant ships and hunting German U-boats not far from Halifax's coast. But the relationship with the city of Halifax was not without turmoil; at the conclusion of the war the pent-up frustrations of sailors boiled over into the V-E day riots.

Part of the popular Images of Our Past series, Halifax and the RCN marks the centennial of the Royal Canadian Navy's founding in 1910. Author John Boileau's superbly researched narrative is supplemented with over 150 historical photos of the sailors, ships, and shore establishments that defined the RCN. An accessible and lively photographic history, Halifax and the RCN is a worthy tribute to the Royal Canadian Navy and its home port." - from the rear cover.

Contents:
1. Humble Beginnings;
2. The Halifax Patrols;
3. An End, an Interlude, and a Beginning;
4. The Courage of the Convoys;
5. Death and Destruction on Halifax's Doorstep;
6. The Sailors Who Saved the City;
7. Reaching the Boiling Point;
8. Sailors in Skirts [the WRCNS, Wrens, &c];
9. Conflict in the Land of the Morning Calm;
10. Above and Below;
11. The Cold War Navy;
12. New Horizons;
13. Unification and After.
Includes an introductory note entitled "Naval Nomenclature for the Novice".

Author Name: BOILEAU, John Images of our Past series)