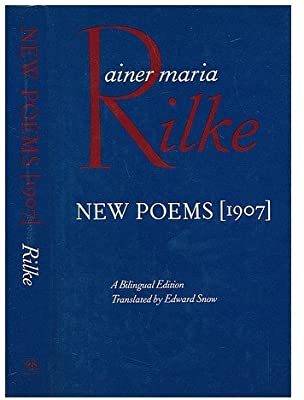 "Here Rilke pursues an objective ideal through language that is borh lucid and complex -- qualities masterfully rended by Mr. Snow's translations. Rilke called his new works 'thing-poems', and they possess qualities of volume and contour achieved through a subtle interaction of subject and style. The poems have a material or sculptural quality deriving from semantic compression and a new outward focus that replaces the introspection of his earlier works.

The result of this new approach is a fusing of object and consciousness that, as Mr. Snow observes, 'is, finally, the great theme of the New Poems, in spite of their apparent worship of states of withdrawal, apartness, and fulfilled isolation,' for they open the dimension of a world 'where subject and object are inseparable aspects of an imaginatively engendered unity'."
With errata slip laid in.