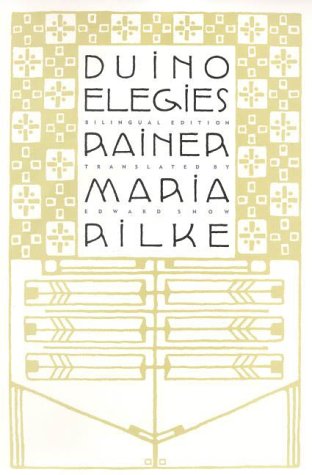 "'Who, if I cried out, would hear me among the angelic /
orders? And even if one of them pressed me /
suddenly to his heart: I'd be consumed /
in his stronger existence. For beauty is nothing /
but the beginning of terror, which we can just barely endure /
and we stand in awe of it as it coolly disdains /
to destroy us. Every angel is terrifying.'

Begun in a period of spiritual crisis in 1912 and completed in a second burst of inspiration in 1922, these ten loosely connected lyrics have come to define the Rilkean sensibility. With their symbolic landscapes, vatic pronouncements, complex tropes, and often haunting intensity, the ''Elegies'' rank among the outstanding visionary works of the century." - from the dustjacket.