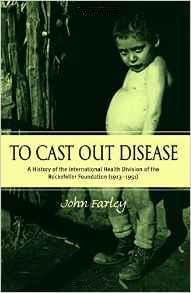 To Cast Out Disease : A History of the International Health Division of the Rockefeller Foundation (1913-1951). First Edition in dustjacket

"Though one ofthe most important public health agencies of the 20th century and the most powerful and richest branch of the Rockefeller Foundation, the Internation al Health Division's history (1913-1951) has never been told before. This original work is based on a vast multitude of letters, reports and photographs the author uncovered in the Rockefeller Archives. Farley describes the internal struggles and the conflicts with foreign and US governments of the "medical barons" who ran the organization as they set its goals and tried to eradicate some of the world's most serious diseases. He also describes the first PDF testing of DDT and the preparation for the US army of a yellow fever vaccine that turned out to be contaminated. He takes the reader into the often byzantine world where the organization endowed schools of public health and nursing in such diverse places as London, Toronto, fascist Rome,militaristic Tokyo, and Calcutta in the dying days of the British Raj. Farley enlivens the book with sketches of the personalities and prejudices of those who worked in the Division and of the scandals that rocked it from time to time. He shows that in the continuing debate between those who believe that ePub disease is the root cause of ill health and poverty and those who see poverty as the primary cause, the Division remained firmly in the former position. He also shows that after it closed, former members exerted considerable influence on the development of the World Health Organization. Opposing some recent historians, Farley argues against the view that the Health Division served as an advance guard for American capitalism. His lively book will be welcomed by all who are interested in the history of public health, tropical disease, and medical institutions." (from the dj).

Part III. A Research Program.
11. Yellow Fever Vaccines: A Slap in the Face.
12. Diseases for Research.

Part V. Finale.
16. Postwar Confusion: What to Do Next?
17. Conclusion: Swinging Pendulums.

The late John Farley "received his early education in England and emigrated to Canada in 1959. After receiving his Ph.D. in 1964, he was appointed to the Biology Department at Dalhousie Universityin Halifax, Nova Scotia, teaching in the marine biologv program. In the late 1960s he moved into the history of science and after a sabbatical year at Harvard, began teaching the subject. Finally, because of hs professional training in parasitology, he shifted into the history of medicine, particularly tropical medicine." (from the dj).

Title: To Cast Out Disease : A History of the International Health Division of the Rockefeller Foundation (1913-1951). First Edition in dustjacket

To Cast Out Disease : A History of the International Health Division of the Rockefeller Foundation (1913-1951). First Edition in dustjacket