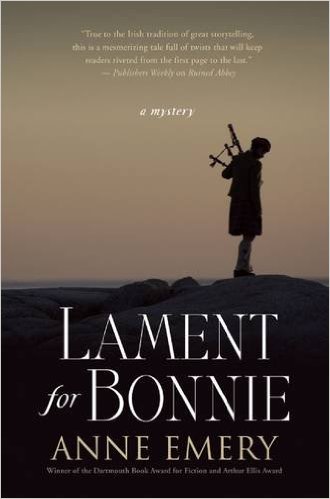 Lament for Bonnie : A Mystery. First Edition in dustjacket

"In the ninth book in Anne Emery's award-winning Collins-Burke mystery series, Lament for Bonnie (ECW Press, September 13, 2016), Monty Collins otters his legal services to the family of missing twelve-year-old Bonnie MacDonald. The beloved stepdancing, fiddling youngest member of Cape Breton's famed Clan Donnie band has disappeared after a family party and no one thinks for a minute that she ran away.

Monty isn't the only one close to the case; hts daughter, Normie, also becomes immersed in the action. As she gets to know Bonnie's friends and family, she learns things she wishes she never had, andstarts having nightmares — or are they visions? Her spooky great-grandmoth er makes no secret of the fact that she senses the presence of evil in their village — the kind of evil RCMP Sergeant Pierre Maguire left Montreal to escape. But Maguire finds that vein of darkness running beneath the beauty and vibrant culture of Cape Breton. And he learns that this isn't the only dark passage in the Clan Donnie f amity history." (from publisher's promotion sheet, laid in).

Anne Emery is a lawyer and the author ot the Collins-Burke mystery series. She has won an Arthur Ellis Award, an Independent Publisher Book Awards silver medal, and a Dartmouth Book Award. She lives in Halifax, Nova Scotia.

Title: Lament for Bonnie : A Mystery. First Edition in dustjacket

Lament for Bonnie : A Mystery. First Edition in dustjacket