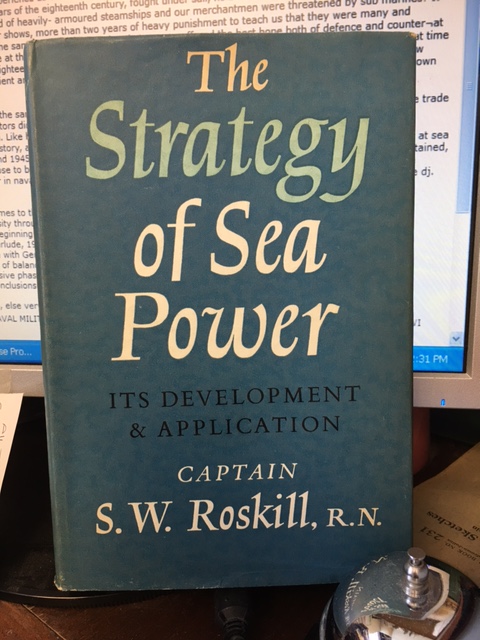 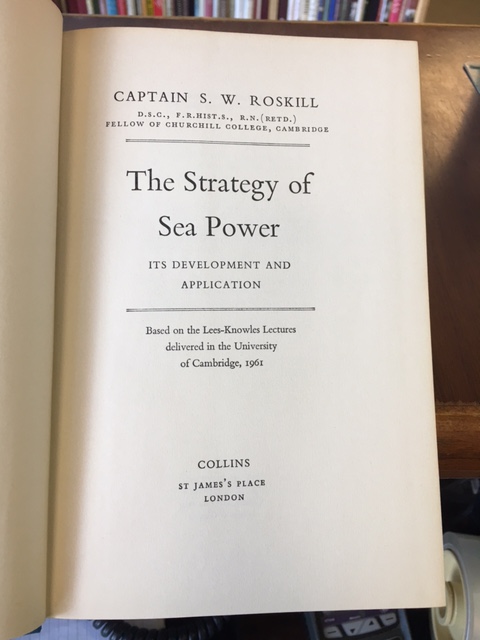 Strategy of Sea Power : Its Development and Application : Based on the Lees-Knowles Lectures delivered in the University of Cambridge, 1961. Second Printing in dustjacket.

ROSKILL, Captain S.W. The Strategy of Sea Power : Its Development and Application : Based on the Lees-Knowles Lectures delivered in the University of Cambridge, 1961. London : Collins, (May 1963). Second Printing. Pp (6),7-288. 8vo, blue cloth, gilt lettering to spine.

"For centuries sea power has been the first and last means both of defending our country and of striking at our enemies. What part, if any, can it play in an age of nuclear weapons and guided missiles? It is the argument of this clear and succinct historical survey that the principles and practices of war change much less than is often supposed. Each new invention and technological change provides a specious excuse to dismiss the study and analysis of past experience as an occupation fit only for the antiquarian and the academic. What lessons, it may be asked, could the wars of the eighteenth century, fought under sail, hold for the strategists of 1814 when our battle fleet was composed of heavily- armoured steamships and our merchantmen were threatened by sub marines? It took, as the author shows, more than two years of heavy punishment to teach us that they were many and relevant. We see the same reluctant admission that convoy offered the best hope both of defence and counter¬at tack. We recognise at the battle of Jutland the same unnappy effects of a too rigid method of fleet control that time and again in the eighteenth century had robbed us of victories that were there for the taking. And we see how neglect of the ancient art of combined operations lost us opportunities to strike telling blows at places of our own choice.

In war, as in life, the same situations carry out a commando raid, to supply a base or to protect our seaborne trade just as our ancestors did before us. Circumstances change, weapons change, tactic change, but the strategic principles remain. Like his great forerunners, Mahan and Richmond, Captain Roskill studies his subject in the perspective of history, a perspective which is lengthened by his unrivalled command of the history of the war at sea between 1939 and 1945. His observations on our present defence policy are informed by the insights thus obtained, as well as by those to be expected from one who has made the sea his profession. This is a book that no one interested either in naval history or in the present controversy over defence can afford to neglect." - from the dj.

Contents :
I. From early times to the end of the Seven Years' War.
II. From adversity through triumph to "Pax Britannica".
III. From the beginning of the twentieth century to the end of the First German War.
IV. Uneasy interlude, 1918-39.
V. The struggle with Germany renewed : the defensive phase, 1939-41.
VI. The period of balance, 1942-3.
VII. The offensive phase, 1944-5.
VIII. Some conclusions regarding the War of 1939-45, and a glance at subsequent developments.

Title: Strategy of Sea Power : Its Development and Application : Based on the Lees-Knowles Lectures delivered in the University of Cambridge, 1961. Second Printing in dustjacket.

Strategy of Sea Power : Its Development and Application : Based on the Lees-Knowles Lectures delivered in the University of Cambridge, 1961. Second Printing in dustjacket.