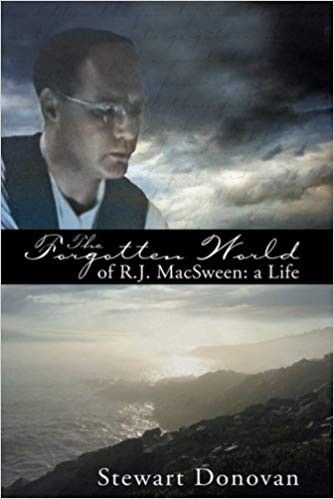 The Forgotten World of R.J. MacSween : A Life. First Edition

Father Roderick Joseph MacSween (b. May 8, 1915, Ironville, Cape Breton - d. February 1, 2002, Antigonish) was a poet and for 35 years an English professor at St. Francis Xavier University, Antigonish, Nova Scotia, and founder of The Antigonish Review.

A biography of the influential Cape Breton-born poet, professor, and clergyman.

"Like many Maritime thinkers and writers, R.J. (Roderick Joseph) MacSween grew up in conditions of poverty and hardship. Born of Gaelic-speaking Scots living on the shores of the Bras d'Or Lake in Cape Breton, he was ordained a Roman Catholic priest and recruited to teach at St. Francis Xavier University in Antigonish, where he established the first creative writing course in a Canadian university.

MacSween was founder of 'The Antigonish Review', a leading literary journal and he influenced the careers of writers like Alistair MacLeod, Sheldon Currie and Lyndon [sic] MacIntyre, as well as thousands of students from several generations. Shortly after his death, MacSween was eulogized as Canada's 'great unknown poet'.

'The Forgotten World' is a literary biography that examines the life and work of this relatively unknown, enigmatic and gifted man from Cape Breton." - from the rear cover.

Introduction.
1. Ironville to the Bay : In Search of Family;
2. Student and Seminarian;
3. Years in the Parish : Pomquet to New Waterford;
4. Return to Campus;
5. Mockler to the Mount : Professor and Chaplain;
6. Church, State and School : Confronting the 1960s;
7. The Forgotten World;
8. The Antigonish Review;
9. Called from Darkness.
Afterword.

With end-notes, bibliography and indices.

The Forgotten World of R.J. MacSween : A Life. First Edition