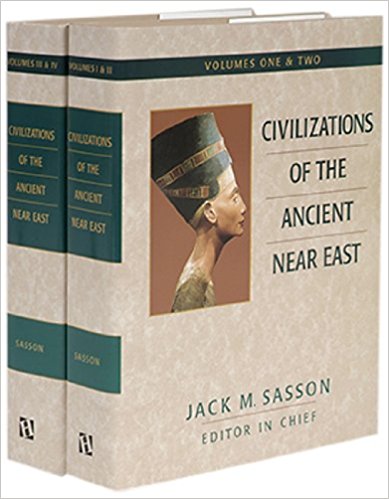 "History begins in the anc ient Near East. While earlier peoples left signs -- at Stonehenge, on the walls of caves in France -- it is in the Near East that we first find messages, evidence of the transmission of knowledge from one generation to another, and the organization of nomadic tribes into societies with distinctive class structures, religions, and governments. Ancient Near Eastern civilizations took a great many forms, from the city-states of Mesopotamia to the centralized monarchy of Egypt, and they generated vital traditions in art, architecture, and literature. Through constant interchange with other parts of the world, these cultures influenced the emergence of three of the world's great religions -- Judaism, Christianity, and Islam -- and the shape of human history into the Middle Ages and beyond. The vast expanses of desert in the region have preserved many ancient remains that scholars have recovered and analyzed. Spanning more than 4,000 years, from the Early Bronze Age to 325 BCE, this set explores all aspects of the emergence and development of the diverse cultures of the ancient NearEast.

Civilizations of the Ancient Near East presents this enormously rich world from a variety of perspectives. It describes the physical world of the ancient Near East, evaluates the impact of ancient Near Eastern civilizations on succeeding cultures, andreconstructs its cultural contexts based on archaeological findings and th e deciphering of documents. This two-volume edition contains the complete text of the original four-volume set, including 189 articles organized in eleven parts, enhanced by 46 maps and 612 photographs and line drawings.

Civilizations of the Ancient Near East brings together for the first time in one accessible resource scholarship that was previously scattered in hundredsof monographs and journal articles. One hundred and eighty-nine scholars f rom all over the world contributed their expertise to make this set the most appealing, original, and comprehensive reference on this fascinating areaof study. All students, teachers, and scholars who seek to satisfy their c uriosity about the ancient Near East's peoples and cultures will find within these volumes articles that intrigue and inform them."


Very good in dustjackets, appears unread.
NOTE : Extra shipping will be required as this is a heavy set. 250.00