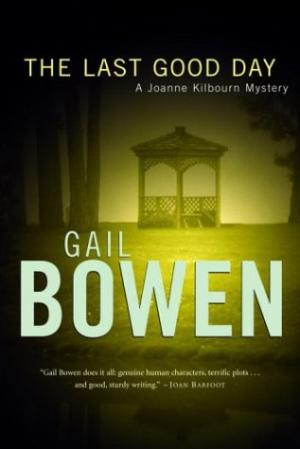 "A languid summer night at Lawyers' Bay is shattered by the noise of a car racing to the end of a dock and plunging into the deep, murky water of a northern lake. Help is there in minutes, but it comes too late for Chris Altieri, the young lawyer alone inside the car.

So begins Gail Bowen's thrilling new mystery, one that takes readers into the dangerously entangled affairs of a prestigious law firm,and returns Joanne to the heartbreak of an old love affair -- and to the promising start of another.

Clearly, Altieri intended to die; this death wasno accident. Just hours earlier, he'd admitted to Joanne Kilbourn that he'd done something unforgivable. At the time, the confession seemed to have eased his mind, but now he is dead. What happened in the interim, Joanne wonders.

Joanne and two of her children are staying at a cottage in the same gated enclave as Chris Altieri and his partners from Falconer Shreve. All the lawyers have summer homes on the same bay, and all are now in shock over Chris's death. Or are they? Joanne is puzzled by how swiftly the lawyers close ranks, and that's not all that strikes her as odd. Why is her former lover, Inspector Alex Kequahtooway, involved in the police investigation of asuicide out at the lake?

When Joanne learns that a young female lawyer abr uptly left Falconer Shreve months earlier and hasn't been seen since, her instincts tell her that something is terribly wrong. Then the cottage she isstaying in is broken into, and for her and her children's safety, Joanne realizes that she must keep quiet, very quiet, about her own inquiries. Someone at Lawyers' Bay is determined to stop her from finding out the truth." - from the dustjacket.