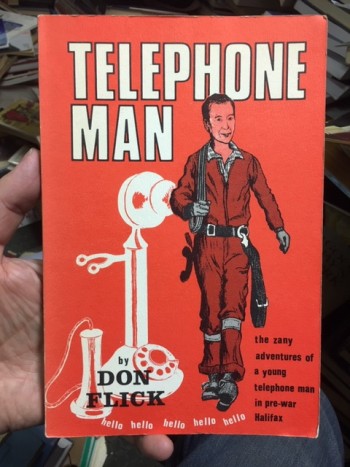 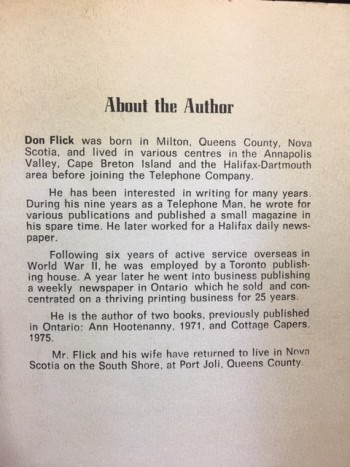 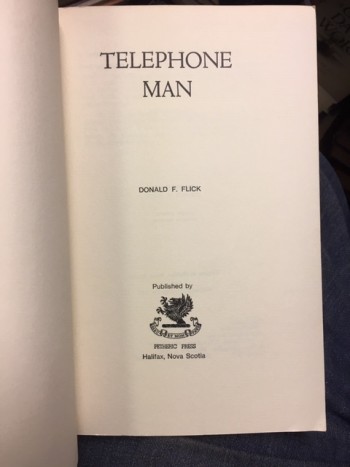 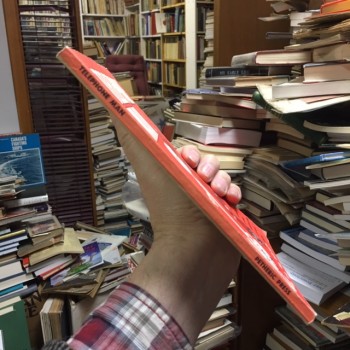 Cover subtitle : "the zany adventures of a young telephone man in pre-war Halifax".

Donald 'Don' F. Flick was living in Port Joli, Queens County at the time of publication.

"Don Flick was born in Milton, Queens County, Nova Scotia, and lived in various centres in the Annapolis Valley, Cape Breton Island and the Halifax-Dartmouth area before joining the Telephone Company.

He has been interested in writing for many years. During his nine years as a Telephone Man, he wrote for various publications and published a small magazine [Whirligig Magazine, not noted in Laugher], although Irma Flick is] in his spare time. He later worked for a Halifax daily newspaper." - from r. cover.

1. Apprentice Lineman;
2. Christmas Eve in a Bawdy House [north end of Barrington Street];
3. Apprentice Installer;
4. Crawl Softly in a Speakeasy [113 Market Street];
5. Exchange Maintenance Apprentice;
6. The Stare Mongers;
7. Bible Reading Grandma and the Short Circuit;
8. How I Launched a Finance Company into Orbit [the Friendly Finance Corporation, in the Roy Building, Barrington Street];
9. Montreal Prostitutes Update Exchange;
10. Bootleg Stuff at its Worst;
11. French as an Alternative;
12. Froggies in the Nude.