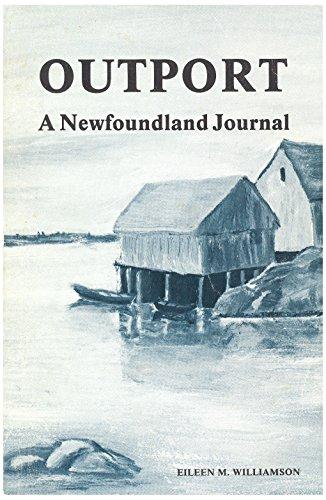 Williamson was the founder and editor of Springdale's first newspaper.

"Outport is a vivid and earthy account of seven years in the life of a small, remote community on the Northeast coast of Newfoundland, told from the point of view of "a Mainlander".

After generations of poverty and hardship, the 1960s brought rapid social and economic change to Newfoundland's many isolated towns and villages. Outport tells us, with affection and sensitivity, how the people of Springdale faced their new, uncertain future with traditional courage and humor." - from rear cover.

"Newfoundland, that ancient and historic Colony of the British Empire which became Canada's 10th Province in 1949, has had a tragic past of undeveloped natural wealth, of poverty and isolation.

To a person born and brought up on the Saskatchewan Prairies, Newfoundland's outports and out-islands have had a special interest. This book tells of my experiences living for seven vears in one of these small outports, of the people I met and came to know, how the village grew and developed during the life of the Whalesback Mine.

The trials and tribulations encountered as the founder and editor of Newfoundland's tenth newspaper, provided stimulation, fun and an absorbing interest in learning something new, since I was totally inexperienced in every phase of journalism, reporting, selling advertisements, and had no knowledge whatever ot arranging advertising layouts and distribution.

The stories of the people living in these remote areas, their courage in dealing with every-day living conditions, their gaiety and wit, will I hope be of interest to other Canadians, to former Newfoundlanders who no longer live on their Island, and whose children, for a variety o£ reasons, although although interested, might not be so well informed about the outports" - the Foreword.

Some wear to cover, with corner crease to front cover, else very good. Signed, with an inscription on the dedication page, by Williamson, November 4, 1980. 25.00