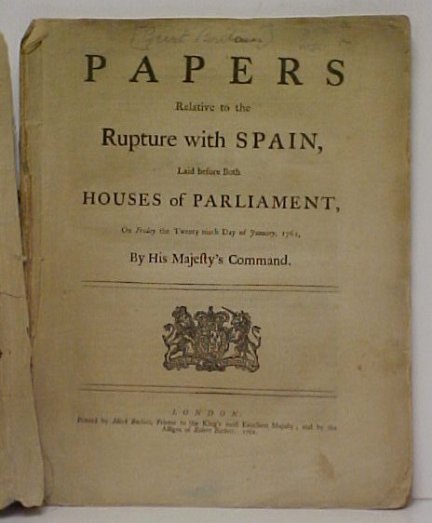 Papers Relative to the Rupture with Spain

(Great Britain - Parliament). Papers Relative to the Rupture with Spain, Laid before Both Houses of Parliament, On Friday the Twenty ninth Day of January, 1762, By His Majesty's Command. London : Printed by Mark Baskett, Printer to the King's most Excellent Majesty; and by the Assigns of Robert Baskett, 1762. Pp (2),[1]-71,(1). 8vo, plain wraps. O'Dea 168, Waldon pp.487-8,TPL 6496. A collection of vigorous correspondence, both inter-ministerial & diplomatic. "As to the stale and inadmissible Pretensions of the Biscayans and Guispuscoans to fish at Newfoundland, on which important Point your Excellency is already so fully instructed, you will again on this Occasion let M. Wall clearly understand, That this is a Matter held sacred; and that no Concession on the Part of His Majesty, so destructive to this true and capital Interest of Great Britain, will be yielded to Spain, however abettedand supported [...]" - p.3, William Pitt to the Earl of Bristol, Ambassado r to Spain. "After M. Wall had worked up his Anger to a Height I had never before seen, he then said, with uncommon Warmth, That he would himself be the Man to advise the King of Spain, since his Dominions were to be overwhelmed, at least to have them seized with Arms in his Subjects Hands, and not to continue the passive Victim he hitherto appeared to be in the Eyes of the World. I attended to this Discourse, without interrupting the Thread of it; and, at the Conclusion of it, I desired, with the utmost Serenity, of General Wall to give me an Answer to the Questions I had first started, and we would afterwards proceed to discuss what his Excellency had been expatiating upon. But the Spanish Minister only renewed some of his former Exclamations, by insisting, that we had set the Spanish Power at Defiance during this War; that we had attacked and plundered their Vessels, insulted their Coasts; violated the Neutrality of these Kingdoms, encroached upon the Territorial Jurisdiction of His Catholick Majesty's Dominions in America, by fortifying ourselves in an illegal Manner in the Bay of Campeachy and the Gulf of Honduras, erecting fresh Settlements, and seizing on Logwood in a most arbitrary Manner, besides denying the Spaniards a Right, they had so long claimed, to fish upon the Banks of Newfoundland; nay, even wanting to put theBiscayans and Guispuscoans on a worse Footing at present, with regard to t heir Pretensions to the Bacallao Trade, than they had been by the Treaties of Utrecht, and that of 1721, where the Article in relation to them was, That those Spaniards should enjoy que Jure sibi vindicare poterunt : Whereas all my Instructions had run to declare their Claim to be stale and inadmissible, and finally, to assert that England hoped the Catholick King would never expect this sacrifice as the Price of a Union, which could never be consented to on those Terms." - pp.26-27, the Earl of Bristol to the Earl of Egremont, Secretary of State. The conflict is reiterated on pp. 4, 8, 10, 13, 16, 28, 35, 53, and 55. Like the TPL copy this is in "wrappers of old greenish gray paper", in this case chipped & detached wrappers, else very good. 750.00

Title: Papers Relative to the Rupture with Spain

Papers Relative to the Rupture with Spain