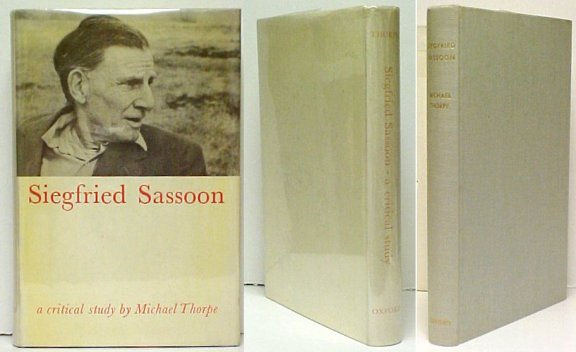 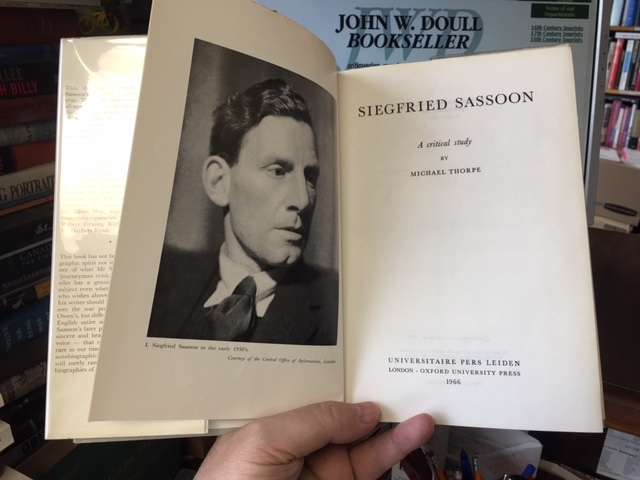 (SASSOON, Siegfried). THORPE, Michael. Siegfried Sassoon : A Critical Study. London : Oxford University Press / Universitaire Pers Leiden, 1966. Pp (5),[vi]-[xi],(3),[3].318,(2). Portrait frontispiece. Corrigenda (tipped in) at preface page. 8vo [155 x 232 mm], grey cloth, gilt lettering to spine. Ascarce work by this Mount Allison University professor, Michael Thorpe (b. 1932, England). "This, the first full-length study of Mr Sassoon's writing s, appears in his 80th year. Thorough consideration is given to all aspectsof his work, including his much discussed war poetry, but the main emphasi s is upon the interest and value ofi those writings which, though widely read, have received little critical notice — the semi-autobiographical Memoirs of George Sherston and the three volumes of 'pure' autobiography, especially The Old Century. His later meditative and devotional poetry is also discussed at iength and related to the English tradition of such writing. His whole achievement is estimated in a final chapter, while the appenices include the full text of The Daffodil Murderer, hi« first noteworthy poem, out of print since 1913, and a comparative diiscussion of a number of narratives of the Great War, especially those by his near-contemporaries Edmund Blunden, Robert Graves, Richard Aldington and Herbert Read. This book has not been written in a hagiographic spirit nor in the calculating manner of what Mr Sassoon has called the 'journeyman critic.' It is the work of one who has a genuine sympathy with his subject even where he cannot praise and who wishes above all that what is best in his writer should have its due. Mr Thorpe ses the war poetry as, not inferior to Owen's, but different in kind, the strongest English satire since Byron; he finds Mr Sassoon's later poetryuneven, but always sincere and heartfelt, with an individual voice — that of the true contemplative, rare in our time; whilst of the best of the autobiographical works he concludes 'they will surely rank among the classic autoiographies of the age.' Contents : Preface. Part I : Lyricist and satirist. 1. Poetic beginnings. 2. Effective protest. 3. Transition. 4. Reluctant satirist. Part II: Peace and war recaptured. 5. The Sherston trilogy (I). 6. The Sherston trilogy (II). Part III: Renewed retrospection. 7. The makingof a poet (I). 8. The making of a poet (II). 9. Siegfried's journey: the a utobiographies: a summing-up. Part IV: A religious concern. 10. Prologue: views on poetry. 11. The way of dispossession. 12.. Sequences. 13. Resolution. 14. Achievement. Appendices. Some foxing to top edge, else very good in dustjacket (spine sunned, some faint browning to front panel). 75.00