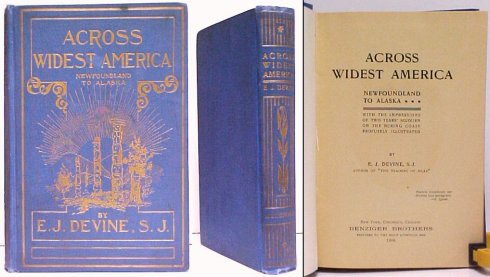 Across Widest America : Newfoundland to Alaska. With the Impressions of TwoYears' Sojourn on the Bering Coast. US ed. inscribed

DEVINE, E.J., s.j. Across Widest America : Newfoundland to Alaska. With theImpressions of Two Years' Sojourn on the Bering Coast. Profusely Illustrat ed. New York, Cincinnati / Chicago : Benziger Brothers, (August) 1906. First U.S. Edition. Pp (12), [1]-307, (1), portrait frontispiece + 24 p. of illustrations + folding map. 8vo, blue cloth with gilt lettering and totem pole design to fr.board. O'Dea 1316a note, Watters p.958, Rhodenizer p.80, Tourville, Alaska: A Bibliography 1283. Chapter I. Newfoundland - Orders for Alaska - The Journey Begins. Newfoundland on pp.[1]-8. Spring 1902. "Two very interesting events took place during my stay which gave me glimpses of colonial life. One was the annual opening of the Legislative Assembly, [...].The second event was the opening of the sealing season. [...]. An inceiden t occured which was not down on the programme, but which lent additional interest to the scene on the docks. The sealmen went out on strike for higherwages. Three thousand daring, grim-looking Islanders marched up and down t he streets, clamoring for better terms for their toil. This was a new eventin the life of the city; [...]. - pp.2-3. par "When Newfoundland ceases to play with Fate and enters the Canadian Confederation, where she rightfully belongs, the problem of the future of the colony will solve itself. Meanwh ile, printer's ink and the advertiser - those heralds of empire - are actively at work." - p.7. Illustrations : "The narrows - Entrance to the Harbor of St.John's, Newfoundland" and "St.John's, Newfoundland" (opp. p.16); "Newfoundland Landscape" (opp. p.32); and "Cape Spear, Newfoundland, the Extreme Easterly Point of America" paired with "Cape Prince of Wales, Alaska, theExtreme Westerly Point of America" (opp.p.96). "This volume embodies the s ubstance of various articles which appeared in the London Month and the Canadian MessengerÄ Ä. To these some new matter has been added, and the whole has been recast and thrown into a more permanent form."- the Preface. Another in the "Newfoundland to ..." genre. See Rae's Newfoundland to Manitoba, (1881, O'Dea 907) and Mrs. Vincent's Newfoundland to Cochin China, (1892, O'Dea 1092). A few short margin tears, ow vg, with inscription to a Mr.John Callaghan "with Compliments and best wishes of the Author, Montreal July 1911". Uncommon. 95.00

Title: Across Widest America : Newfoundland to Alaska. With the Impressions of TwoYears' Sojourn on the Bering Coast. US ed. inscribed

Across Widest America : Newfoundland to Alaska. With the Impressions of TwoYears' Sojourn on the Bering Coast. US ed. inscribed