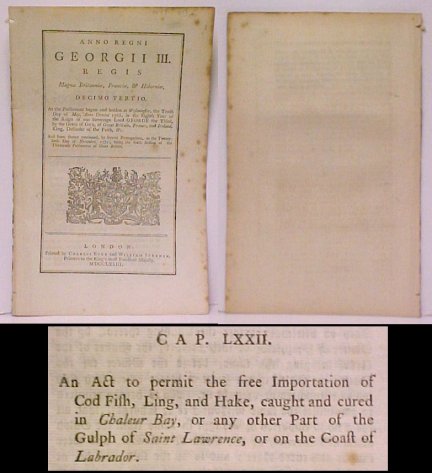 Act to permit the free Importation of Cod Fish, Ling, and Hake

(Great Britain). ... An Act to permit the free Importation of Cod Fish, Ling, and Hake, caught and cured in Chaleur Bay, or any other Part of the Gulph of Saint Lawrence, or on the Coast of Labrador. L.: Printed by Charles Eyre and William Strahan, Printers to the King's most Excellent Majesty, MDCCLXXIII, [1773]. Pp (2), 1399-1402, (2). 4to, self wraps, stitched, disbound. par With the heading : Anno decimo tertio Georgii III. Regis, Cap. LXXII. title : Anno regni Georgii III. regis Magna Britannia, Francia, & Hibernia, decimo tertio. At the Parliament begun and holden at Westminster, the Tenth Day of May, Anno Domini 1768, in the Eighth Year of the Reign of our Sovereign Lord GEORGE the Third, by the Grace of God, of Great Britain, France, and Ireland, King, Defender of the Faith, &c. And from thence continued, by several Prorogations, to the Twenty-sixth Day of November, 1772; being the Sixth Session of the Thirteenth Parliament of Great Britain. O'Dea 195 (which has "cap. 57" instead of 72). TPL 6533. O'Dea records only three earlier acts encouraging the fishing trade (1650, 1663, and 1708). This is the first of the modern spate. For a study of one of our printers and his successors, see J.A.Cochrane's Dr. Johnson's Printer: The Life of William Strahan, (L., 1964). Chapter 9, "The King's Printer" has a passage on John Reeves, the author of History of the Government of the Island of NewfoundlandÄ Ä, (L., 1793) : first occasion was when Eyre and Strahan's period expired in 1799. It [the patent as King's Printer] was then renewed in favour of John Reeves, George Eyre and Andrew Strahan for another 30 years. Reeves, according to [Luke] Hansard's Typographia, became a sort of lay brother of our profession, by means of Mr.Pitt, as a reward for some political services which he rendered the cause of that statesman. Mr. Reeves embarked pretty largely in his new profession of Prayer-book and Bible-printing, until his interest in the Patent was purchased by Mr. Strahan.' [Foot-note]: Reeves was a lawyer who held minor offices under the Crown . No doubt his chief merit in Pitt's eyes was his formation, in 1792, of the Association for preserving Liberty and Property against Levellers and Republicans. - pp.126-7. No mention of Newfoundland. The general title-page is present with its imprint and crest. Fine. 250.00

Title: Act to permit the free Importation of Cod Fish, Ling, and Hake

Act to permit the free Importation of Cod Fish, Ling, and Hake