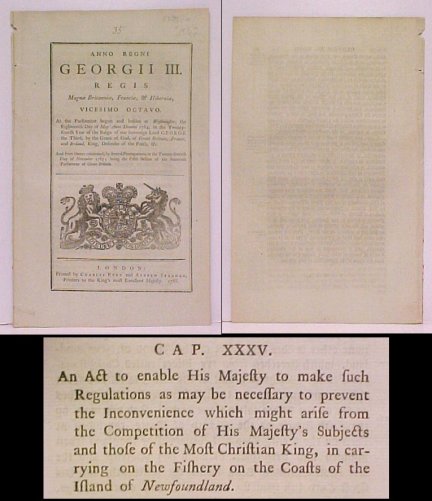 (Great Britain). ... An Act to enable His Majesty to make such Regulations as may be necessary to prevent the Inconvenience which might arise from the Competition of His Majesty's subjects and those of the Most Christian King, in carrying on the Fishery on the Coasts of the Island of Newfoundland. L.: Printed by Charles Eyre and Andrew Strahan, Printers to the King's most Excellent Majesty, 1778. Pp (2), 623-627, (1). 4to, self wraps, stitched, disbound. With the heading : Anno vicesimo octavo Georgii III. Regis, Cap.. Full title : Anno regni Georgii III. regis Magna Britannia, Francia, & Hibernia, vicesimo octavo. At the Parliament begun and holden at Westminster, the Eighteenth Day of May, Anno Domini 1784, in the Twenty-fourth Year of the Reign of our Sovereign Lord GEORGE the Third, by the Grace of God, of Great Britain, France, and Ireland, King, Defender of the Faith, &c. And from thence continued, by several Prorogations, to the Twenty-seventh Day of November, 1787; being the Fifth Session of the Sixteenth Parliament of Great Britain. O'Dea 235. Not in TPL. Reprinted in Reeves, History of the Government of the Island of Newfoundland, (L., 1793), O'Dea 251. The general title-page is present with its imprint and crest. Vg to fine. 185.00

Title: Act to enable His Majesty to make such Regulations as may be necessa