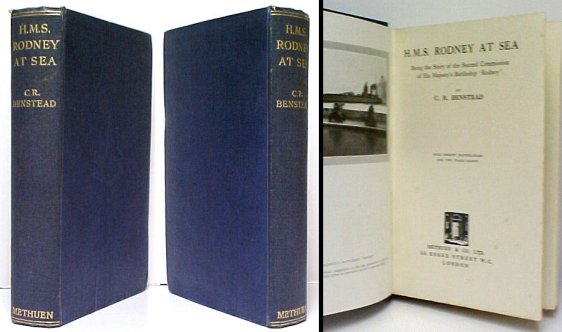 H.M.S. Rodney at Sea: Being the Story of the Second Commission of His Majesty's Battleship Rodney. no dj.

BENSTEAD, C.R. H.M.S. Rodney at Sea : Being the Story of the Second Commission of His Majesty's Battleship 'Rodney'. London : Methuen & Co. Ltd., (1932). Pp (),vii-xii,(2),1-205, (3),(8, publisher's catalogue) + frontispiece,+ [19] leaves plates. 8vo, blue cloth, gilt lettering to spine. Originally intended as a private cruise book for Rodney's crew, this volume details ( in a charming and lighthearted manner) the battleship's voyages in 1930-31-32. The itinerary includes Iceland, the Azores and West Indies, Madeira andGibraltar, as well as extensive cruising in the Channel, North and Irish S eas. With a list of the ship's officers, and chronicles of sporting and cultural events on board. 1. Tells how we commission at Devonport on a fine dayy, hoist a Commander-in-Chief's Flag at Portsmouth in the rain, and sail for a remote northern settlement called Invergordon, occupying ourselves with warlike measures on the way. 2. In which we proclaim an aesthetic affection for pigs and poached eggs, and descending from our high estate, blink sardonic eyes at Joshua, whom we find in Scapa Flow, where, incidentally, we meet our Waterloo. Tells, in conclusion, of men whose stern sheets are likened to water-tight doors. 3. Tells how we find Devon in Ulster, and among its dangerously hospitable inhabitants much solace, not to mention a newly-born street and a black kitten. Embraces the most single-minded city in the British Isles [Londonderry / Derry], and describes, in conclusion, how we come to pick up a Parliamentary Delegation at Rothesay, in Bute, and sail with them for a land that belies its name. 4. In which we come to a barren and dry land, find a garden in a cinder, and meet Gerd, the daughter of Gymir, among the cod-fish- Tells, too, how we lose a boat-race, see a mirage, save an airman, and finally vanish into the blue. 5. Tells how we find men living on rocks that are gardens, and how while listening for a noise, disconcertingly hear the bray of an unspecified ass. Recounts, too, our adventures under sail at Falmouth, our misadventures under power at Lyme Regis, and finally delivers us safely back to Devonport, there to meet an invasion. 6.In which we come again to Invergordon, and, while devoting ourselves to co mpetitive art, lose our cable and win a cup. Describes, too, he now we survive an Admiral's inspection, and then hurry south to Portsmouth, where we delight the gaze of a King and incidentally endure much hardship. 7. In which it's westward-ho for Trinidad, and it's eastward-ho for Spain, between which considerable voyages we enable a pitch lake to fulfil its destiny, search in vain for Friday's footprint, look into the crater of a volcano, and learn how to pronouce Antigua. Tells, too, how all the Med warships and all the Med men, sailed out from Gib and then back again. In short, a very longchapter. 8. Introduces Bill, and tells how we occupy ourselves with guns a t Invergordon, oars at Scapa Flow, and a peculiarly contumacious breed of torpedo at Weymouth, before going by way of Spithead and Torquay to Teignmouth where several young ladies run away to sea. Mentions, too, the start of a great controversy. 9. Describes how we come yet again to Invergordon but return unexpectedly to Devonport; also how we come to poach an expeditious egg in the Firth of Forth. Mentions the genesis of this record, and tells in conclusion of one of our number who takes the cake. 10. In which the curtain comes down on the second act. Before that it completes the story of Rodney's Church, and tells how we uphold the name of Rodney to the end. But itis, of necessity, a short and rather sad chapter. Appendix : The second co mmission of H.M.S. Rodney: List of Officers. Sport. Table of dates, places,and distances steamed. Rubbed, very occasional light foxing, bookplate (As hcroft Collection, Chatham Historic Dockyard Trust), else vg. 125.00

Title: H.M.S. Rodney at Sea: Being the Story of the Second Commission of His Majesty's Battleship Rodney. no dj.

H.M.S. Rodney at Sea: Being the Story of the Second Commission of His Majesty's Battleship Rodney. no dj.