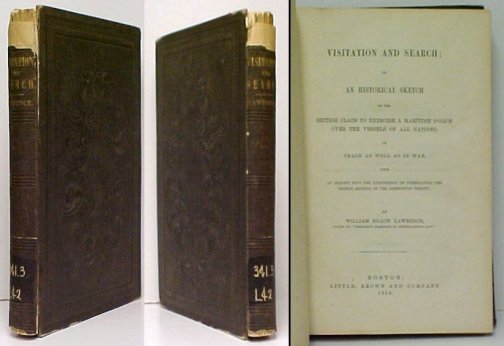 Visitation and Search; or, An Historical Sketch of the British Claim to Exercise a Maritime Police Over the Vessels of All Nations, in Peace as well as War, with an Inquiry into the Expediency of Terminating the Eight Article... First Edition, Signed

LAWRENCE, William Beach. Visitation and Search; or, An Historical Sketch of the British Claim to Exercise a Maritime Police Over the Vessels of All Nations, in Peace as well as War, with an Inquiry into the Expediency of Terminating the Eight Article of the Ashburton Treaty. Boston : Little, Brown and Company, 1858. Pp 218. 8vo, brown pressed cloth.

Contents:
Importance attached by the United States to their maritime rights;

The vessels of a nation, on the high seas, a portion of its territory;

The belligerent right of visitation and search;

Objections of the United States to the abolition of privateering;

Debate in the House of Lords on the " Declaration of Paris";

Proposed abolition of contraband of war;

Impressment of seamen effected through belligerent right of search;

Hautefeuille's restriction on the belligerent right of search;

Object of Great Britain in attempting the right of search in peace;

American ships, seized under the belligerent claim of visitation and search;

Condemned for being engaged in the slave-trade;

Refusal of France and Portugal to grant England a reciprocal right of search;

Declaration of the Congress of Vienna, respecting the slave-trade;

Treaties with Spain and Portugal, for a limited right of reciprocal search;

Decision of Lord Stowell, repudiating all right of search, in peace;

Treaty between England and the Netherlands;

Refusal of the Congresses at Aix la Chapelle and Verona to grant right of search, or to make slave-trade piracy;

British negotiations with the United States as to the slave-trade;

Convention made with England for reciprocal search, but not ratified;

Decisions of the Supreme Court on the slave-trade and right of search;

Treaties of England with Sweden and Brazil, and of 1831 and 1833 with Prance, and the adhesion to the latter of Denmark, Sardinia, the Hansetowns, Tuscany, Naples, and Hayti;

Debates on the British Act of 1839, indemnifying officers for the capture of the vessels of all nations suspected to be engaged in the slave-trade;

Mixed tribunals established by treaties between Great Britain and other powers;

General Cass intervenes to prevent its ratification by France;

Substitution of the Treaty of 1845 between France and England, for those of 1831 and 1833. Debates in Parliament and in the French Chambers;

Ashburton Treaty, stipulating for separate African squadron, as a waiver of the right of search;

President's message and debates on the treaty in executive Session;

Sir Robert Peel's disclaimer of having abandoned the right of visitation;

Debate in the Senate on Sir Robert Peel's speech;

Lord Aberdeen's despatch, reaffirming the British doctrines, transmitted to the House of Representatives, with a message from the President;

Debate in the House of Representatives on the bill for carrying the treaty into effect;

Debate in the Senate on the same subject (Appendix);

British instructions to their cruisers under the Treaty of 1842;

Reclamations for seizure of slaves on board of vessels driven into the British West Indies;

Reclamations for seizure of vessels engaged in the American fisheries;

Statute of 1845 for capturing Brazilian vessels suspected to be engaged in the slave-trade;

Right to arrest pirates under the law of nations, unconnected with claim of visitation on account of the slave-trade;

No right of visitation on the high seas for fiscal or defensive purposes;

Opinions of institutional writers on the right of visitation and search - Wheaton;

Phillimore's attempt to reconcile right of visitation with international law;

His opinion in the Cagliari case;

Treaties in 1849 between Great Britain and other nations for the suppression of the slave-trade;

Decisions under the mixed commissions and in the Vice-Admiralty Courts;

Interference of British cruisers with the American squadron in seizing vessels under the United States flag;

French convention of 1845 with England no longer operative;

Lord Napier's reaffirmance of the claim of visiting American vessels;

The boarding and searching of American vessels by British cruisers in the Gulf of Mexico;

Instructions to Mr. Dallas as to searches on the high seas and in the harbor of Sagua la Grande;

Report of the Committee of Foreign Relations on the stopping and examining of American vessels;

Debate on the committee's resolution, in the Senate;

Note on the right of visitation, at variance with the text, interpolated into the late editions of Kent's Commentaries;

Antecedents of Lord Derby as regards the United States;

Opinion of the Attorney-General in the Cagliari case;

First announcement in Parliament of the aggressions in the Gulf of Mexico;

Lord Malmesbury's declaration that he admitted the international law as laid down by the American Minister of Foreign Affairs;

Opinions of the law-officers of the crown on the right of search;

Announcement in the United States of the British recognition of Gen. Cass's doctrines;

Mr. Dallas's speech on the fourth of July;

No further sanction required for the British renunciation British suggestion of a conventional right of visitation;

Difficulty of making any treaty with England;

Involuntary trespass the only matter open for consideration;

Abandonment of impressment no equivalent for visitation;

Original objections of Mr. Buchanan and General Cass to the Ashburton Treaty;

Practical effect of the treaty as regards the operations of American cruisers in arresting our own citizens suspected of being engaged in the slave trade;

Petition from Rhode Island for the withdrawal of the African squadron;

Desirableness of colonization for free negroes;

Mr. Slidell's resolution to abrogate the eighth article of the Ashburton Treaty, and the report thereon;

Closing slave-markets the only mode of suppressing the trade;

The trade with Brazils no longer exists;

Lord Palmerston refused to acquiesce in the acquisition of Cuba by the United States, or to adopt the same rule with Spain as with Brazils;

Possible change of policy, under the present ministry, as to the acquisition of Cuba by the United States;

Its annexation an effectual means to suppress the trade;

The United States have alone effectually suppressed the slave-trade without evasion;

American legislation on the slave-trade;

As to the coolie trade (Appendix);


Resolution of the House of Representatives respecting the laws prohibiting the slave-trade United States, for considerations of humanity alone, and to their pecuniary prejudice, prohibit the trade;

The slave-trade resisted at the South;

Increase of slave population in the United States;

Their condition favorably contrasted with that of slaves elsewhere;

The cause of the emancipation in the British colonies;

Design of Great Britain to extend emancipation over all America;

British apprentice system and decline of labor in the "West Indies;

Introduction of Africans and coolies;

Retrogression both of the Creole and negro population;

Free negroes virtually reduced to slavery, and efforts for the introduction of African, Chinese, and coolie laborers into Jamaica;

Sufferings attendant upon the transportation of coolies and Chinese;
Supply only kept up by continued importations;

Loss to the West Indies by emancipation;

Lord Brougham and the Bishop of Oxford sustain the coolie trade to the British possessions;

French emancipation the result of the revolution of 1848;

Disastrous effects on the colonies;

Introduction of coolies and Africans;

Debates in the House of Lords on the French emigrant system;

Count Walewski's statement as to the English assent to the French scheme;

Practical effects on Africa of the French proceedings;

Retorts of the French press on the British opposition to their emigration scheme;

Profits derived by England in slavers and otherwise from the suppression of the slave-trade;

Slave-trade not confined to Africa, but extends to the Christians of Circassia and Georgia;

The demand induced by emancipation, of the English and French colonies, effectually prevents the suppression of the slave-trade;

If free labor was required, the British European possession could abundantly supply it;

Condition of American slaves compared with coolies and African immigrants;

Effect of the abolition of slavery in the United States on the production of cotton and the cotton manufacture;

Discussions in the English Parliament on the abandonment of the attempt to suppress the slave-trade by armed cruisers;

Position of the United States as to the slave-trade not analogous to that of England or France;

Is the continuance of the Ashburton Treaty justified by any obligation of the Federal Government?;

Debates of 23d of July, in the House of Commons;

The exposition of the Union and National Intelligencer on the Parliamentary proceedings;

Debate of the 26th of July , in the House of Lords, and Lord Lyndhurst's repudiation of the right of search;

Comments of the London Times and Post on the abandonment of the British claim;

The Revue des deux Mondes on the British concessions;
Conclusion.

Appendices:
A. Abolition of Privateering;
B. Mr. Porsyth's instructions to Mr. Stevenson, on the detaining and visiting American vessels;
C. Mr. Everett's despatch to Mr. Webster, on the appointment of Lord Ashburton;
D. Speech of the King of the French, December, 1841;
E. Debate in the Senate on the bill to carry into effect the Ashburton Treaty, March 2, 1843;
F. President Buchanan's message as regards the El Dorado;
G. Rhode Island Memorial for the withdrawal of the African squadron;
H. American policy with regard to Cuba;
I.- Mr. Reed, minister to China—instructions to consuls respecting the coolie trade;
J. Lord Aberdeen's instructions to Mr. Packenham as to the abolition of slavery in the United States, and Mr. Calhoun's answer;
K. Effect of Emancipation on the trade of the British West Indies with the United States;
L. The consumption of cotton in the different countries of Europe and in the United States.

Title: Visitation and Search; or, An Historical Sketch of the British Claim to Exercise a Maritime Police Over the Vessels of All Nations, in Peace as well as War, with an Inquiry into the Expediency of Terminating the Eight Article... First Edition, Signed

Visitation and Search; or, An Historical Sketch of the British Claim to Exercise a Maritime Police Over the Vessels of All Nations, in Peace as well as War, with an Inquiry into the Expediency of Terminating the Eight Article... First Edition, Signed