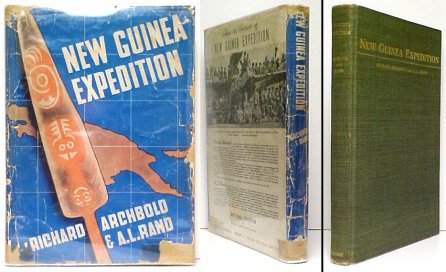 ARCHBOLD, Richard and A. L. RAND. New Guinea Expedition: Fly River Area, 1936-1937. With photographs by the authors and L. J. Brass, G. H. H. Tate, M. J. Healy, and L. A. Willis. NY: Robert M. McBride and Company, (1940). First Edition. Pp. 206 + 1 folding map at rear. Illustrated. 4to, green cloth. "Into the land of the stone age man, the country which civilization passed by, went Archbold and Rand. Their expedition was not in search of gold or oil. It was a quest for far more precious material. Theirs was tto penetrate the secrets of Nature locked in unmapped jungles and mountains guarded by fierce primitive peoples. Head-hunters and cannibals these savages have been called and rightly so, yet New Guinea Expedition is not a blood and thunder record of white men shooting their way in and shooting their way out of the country. Although the explorers were prepared for attacks and other hazards, their most effective weapon of defense proved to be the respoect they showed for the rights and strange customs of the natives." - from the dj. Illustrated with dozens of black and white photographs. Spine rubbed, else vg in worn, tape-repaired dj. 130.00