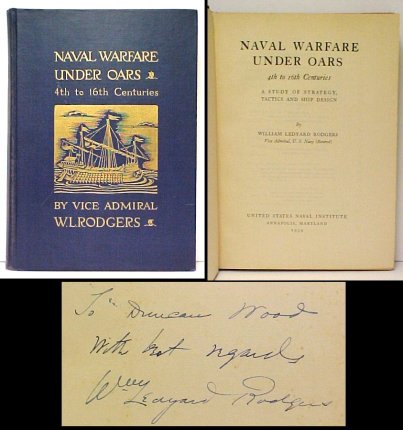 RODGERS, William Ledyard. Naval Warfare Under Oars: 4th to the 16th Centuries : A Study of Strategy, Tactics and Ship Design. Annapolis, Maryland : United States Naval Institute, 1939. First Edition. Pp xiii,358. Illustrated.Large 8vo, blue cloth, gilt decoration to front, gilt lettering on front a nd spine. "Like my preceding volume, Greek and Roman Naval Warfare, this isa study of fleet naval tactics in the days of rowing ships, but during the Christian era. Incidentally, it gives a brief sketch of the political and economic conditions underlying military and naval efforts. Also, as in the earlier work, I have attempted to reconstruct some of the earlier types of men-of-war, for which direct and positive evidence is lacking. Naturally, the worth of such attempts will be better evaluated by, and have more appealto, seamen and naval architects who know the sea and the traditions and pr inciples of naval architecture, than they will to historical students whoseknowledge of past maritime affairs is chiefly confined to casual mention o f them by writers who were more concerned with government and sociology." -from the Preface. Contents : 1. The Navy of the Roman Empire. 2. The Naval Wars with the Saracens. 3. The Navy of the Later Roman Empire. 4. The Firs t Crusade. 5. The Organization of Ancient Navies. 6. The Vikings . 7. Medieval Wars of French and English. 8. Italian Naval Wars. 9. War of Cyprus andCampaign of Lepanto. 10. The War of Elizabeth of England with Philip II of Spain and the Campaign of the Great Armada. With index. Rear hinge cracked , endpaper lightly foxed, cloth lightly rubbed, else very good. Presentation copy signed by author. 240.00