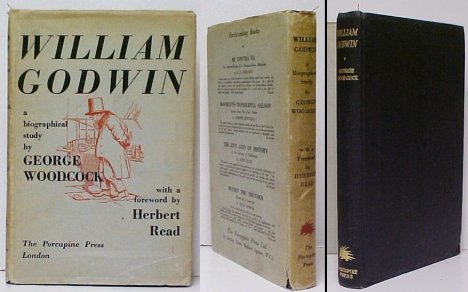 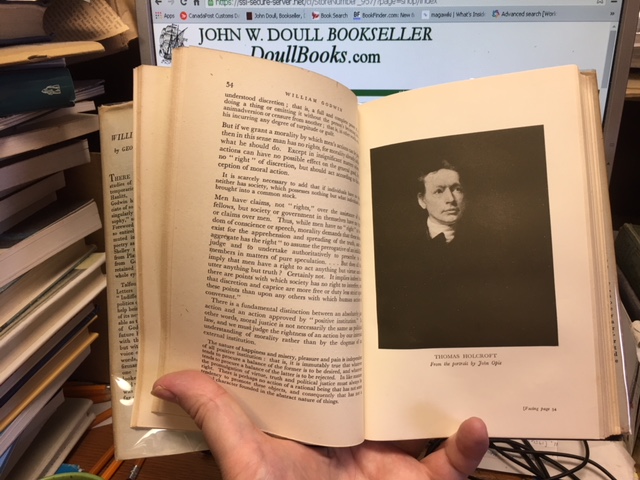 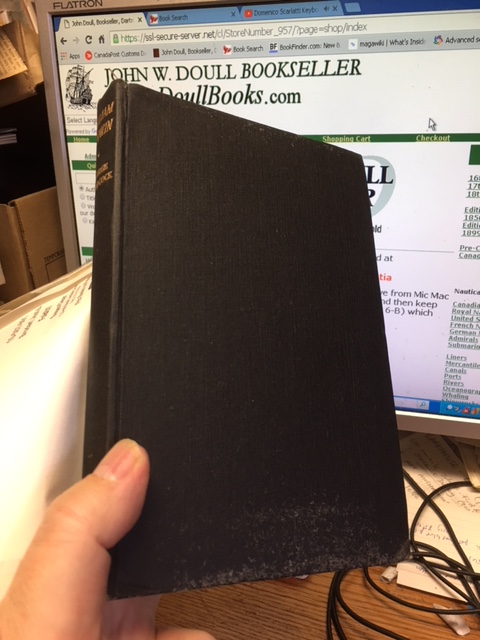 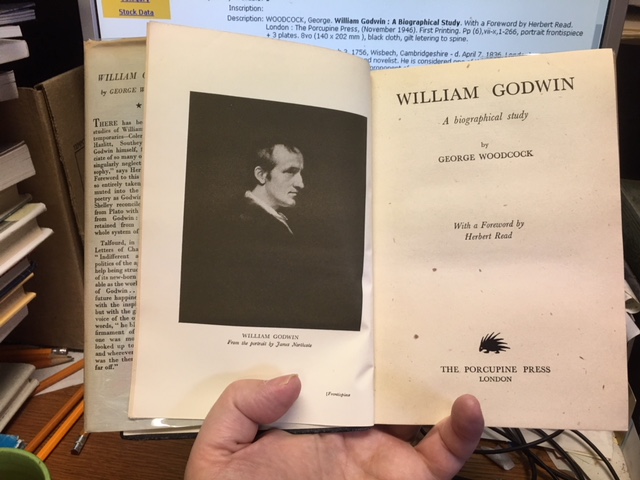 William Godwin (b. March 3, 1756, Wisbech, Cambridgeshire - d. April 7, 1836, London) was an English journalist, political philosopher and novelist. He is considered one of the first exponents of utilitarianism and the first modern proponent of anarchism.

George Woodcock (b. May 8, 1912, Winnipeg, Manitoba – d. January 28, 1995, Vancouver, B.C.) was a Canadian writer of political biography and history, an anarchist thinker, an essayist and literary critic. He was also a poet and published several volumes of travel writing.

"There has been no lack of studies of William Godwin's contemporaries — Coleridge, the Lambs, Hazlitt, Southey, Shelley — but Godwin himself, friend and associate of so many of them, has been singularly neglected. " No philosophy," says Herbert Read in his Foreword to this hook, " was ever so entirely taken over and transmuted into the finer texture of poetry as Godwin's by Shelley ... Shelley reconciled what he took from Plato with what he retained from Godwin: and what he retained from Godwin was the whole system of Political Jistice."

Talfourd, in his edition of the Letters of Charles Lamb, says : "Indifferent altogether to the politics of the age, Lamb could not help being struck with productions of its new-born energies so remarkable as the works and the character of Godwin .. He foretold the future happiness of mankind, not with the inspiration of the poet, but with the grave and passionless voice of the oracle." In Hazlitt's words, "he blazed as a sun in the firmament of reputation ... No one was more talked of, more looked up to, more sought after, and wherever liberty, truth, justice was the theme, his name was not far off."

The long neglect of this most remarkable man, significant political philosopher and novelist, is ended by the present biographical study. Mr Woodcock tells the story of Godwin's life in full detail, with ample quotations from his self-revealing writings. His very full analysis of Godwin's voluminous works (and more particularly the celebrated Enquiry Concerning Political Justice) will save the "modern reader a great deal of effort in acquiring a working knowledge of Godwin and his times. Of great interest also is the story of Godwin's family life: his marriage to Mary Wollstonecraft, the pioneer of "the Rights of Woman"; Godwin's relations with Shelley, and Shelley's runaway match with his daughter Mary with its far-reaching consequences. The story is one of spectacular suciccess, followed! by decline to a neglected old age, the drama of which is given full scope in Mr Woodcock's narrative.

Godwin is often abused by the biographers of his contemporaries, his ideas are belittled and his influence ignored. "He ought to be remembered ," writes George Sampson in the Cambridge History of English Literature, "as a sincere thinker in whose character there was not a trace of self-seeking or self-display." Mr Woodcock shows, moreover, that Godwin's principles of freedom and justice have relevance to the special problems of today. " - (from the dj).

Dampstaining to lower margin of front cover, else very good in spine-browned, rubbed and nicked, but unclipped dustjacket. 70.00