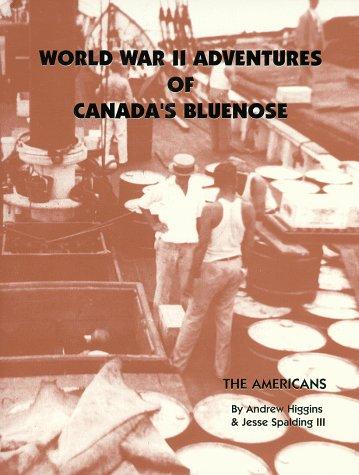 Profusely illustrated with photographs and facsimiles of letters and documents.

"She had been famous as a racer long before the Americans, Jesse Spalding III and Thomas Higgins II bought her. When World War II came along, it was inevitable that she would serve in it.

Her mission was to carry deadly cargoes of munitions and dynamite through the submarine-infested waters of the Caribbean. This was made possible through her superior speed and maneuverability.

Spalding lovingly details the World War II adventures of the Bluenose. He also tells of life in Cuba, the home base of the Bluenose during the war. Cuba had a 'Casablanca" atmosphere, with spies, celebrities and the wealthy all sharing in war struggles. Spalding tells intriguing stories about such figures as Ernest Hemingway and the Duke of Windsor. This book is more than a story of a great ship. It presents a fascinating panorama of a way of life that has vanished.

Andrew Higgins, the son of Spalding's partner, adds to the story with interviews of others who were involved. Higgins includes his own research as well as photos, documents and family letters that existed during the war. Andrew looks at the wartime struggles of a great ship through the eyes of those involved.

Indeed the war years of Canada's Bluenose were spent making a fascinating and valuable difference in the allied war effort." - from the rear.

The Grenfell Mission - The American Introduction by Andrew Higgins.