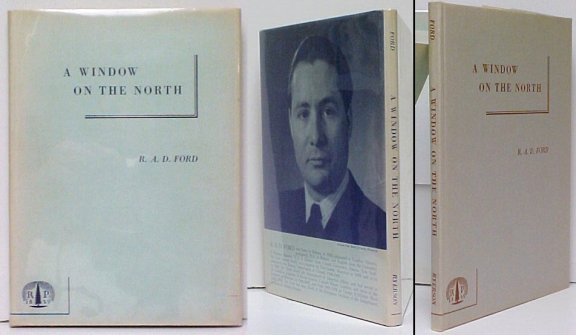 Window on the North. First Edition in dustjacket

"The north and the south: these are the main influences in the poetry of Mr. Ford. And with a high receptivity to extreme, it was luck that took him in the service of Canadian diplomacy from the feminine grace of Rio-de-Janeiro to the hard masculinity of Moscow. Throughout his poems, even those on strictly Canadian themes, these two influences constantly re appear. The book is divided into three parts, of which the third, 'Luis Medias Pontual in Red Square,' is perhaps the most important. It was written just after the war, in Moscow, and reflects the impact on the author of the many disenchanted Spanish Republic émigrés whom he encountered at that time. In the person of Luis Medias Pontual the poem tries to portray the tragedy of the western intellectual of the left, awakening to bitter disillusionment, and of the incapacity of the Westerner to comprehend the mystery of Russia." - from the dj.

The poems:
Part I. Middle of the Century. "Lynx", "Twenty Below ", "The Golden Grove", "The Stranger with the Hammer of Thor", "A. Window on the North", "Middle of the Century", "Back to Dublin", "Thaw in January", "Indian Summer", "Pastiche", "Roadside near Moscow ". Part II.A Delusion of Reference. "Red Landscape", "A Delusion of Reference", "The Stick Laid Down", "Pavlovsk", "Unheeding in Despair", "Revenge of the Hunted", "Small Boys Playing", "Emigré", "Two Sonnets on a Hunting Theme", "Child Crying in the Night", "Blue Mist", "Poem", "Letter to My Mother", "Confidences of an Itabirano". Part III. Luis Medias Pontual in Red Square. Very good to fine in sunned dustjacket (closed tear to front panel). 50.00

Title: Window on the North. First Edition in dustjacket

Window on the North. First Edition in dustjacket