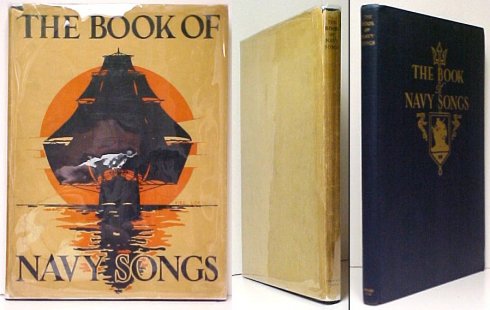 TRIDENT SOCIETY, coll. and ed. The Book of Navy Songs; collected and edited by the Trident Society of the United States Naval Academy at Annapolis, Maryland; music arranged and harmonized by Joseph W. Crosley. Garden City, NY: Doubleday, Doran, 1932. Pp 200. Frontis. 4to, blue cloth, gilt lettering and decoration to front board. "[A] carefully compiled collection of the most typical songs sung by the men and officers of the United States Navy from its very birth right down to the present day. Not only are these the songs of the battleship wardroom and fo'c'sle, but the songs the men of the navy have sung wherever they have served: on frigate and dreadnaught, in fo'c'sle and camp, sailing the seven seas, or marching with the Army in Tripoli, China, and France." -from the dj. Slight edgewear, small light stain to cloth, pencilling to frontis. verso (someone has very neatly planned their garden thereon), else vg in rubbed, nicked dj. 100.00