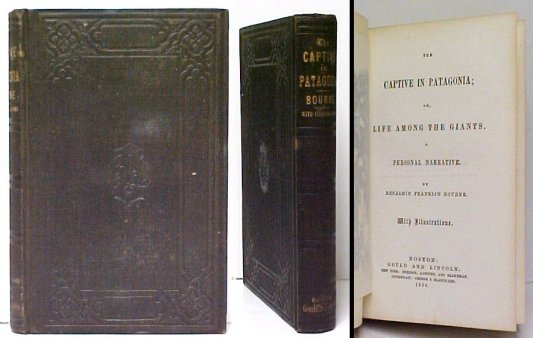 BOURNE, Benjamin Franklin. The Captive in Patagonia; or, Life Among The Giants. A Personal Narrative. With Illustrations. Boston : Gould and Lincoln, 1855. Pp (2),(4,ads),(4),[xix]-xxiv,,[25]-233,(1), (24,ads),(2). Illustrated with a frontispiece and 3 plates. 8vo, brown pressed cloth. Smith B112. First published in 1853. Captain Bourne was mate of the schnooner John Allyne of New Bedford, Massachusetts, bound for California at the height of the Gold Rush. During an ill-advised trading session with the people native to Patagonia, he and three of his shipmates were taken and held captive. The others were released, but Bourne was detained for some time, allowing him to observe (through the lens of his astringent Yankee temperament) the habits and customs of the Patagonians. Upon his release he proceeded to San Francisco, and so offers some choice comments on the exotic inhabitants of that locale, as well. Small stain to top edge of endpapers, brown stains and/or smudging to a dozen pages, tear through pp.xxiii-xxiv but not affecting text, name to rear endpaper, else a very good, bright copy. 100.00