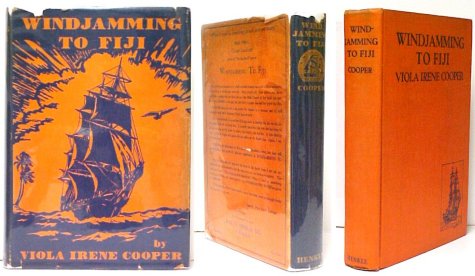 COOPER, Viola Irene. Windjamming to Fiji. New York : Rae D. Henkle Co. Inc., (1929). First Edition. Pp (8),vii-xiii,(3),3-295,(1) + frontispiece + 21 leaves of plates. 8vo, orange cloth, black lettering to front & spine. Map end-papers. An account of two American women's experience as midshipmen on the last voyage of the barque Bougainville, (formerly the Star of Peru) from Vancouver to New Caledonia by way of Fiji. A handsomely designed volume. Introduction by L. Chateauvieux. "If she will do't, she will; and there's an end on't." Evidently the gallant French captain of the ancient barque Bougainville knew this, so he capitulated easily when Viola Irene Cooper and Jean Schoen, two adventuring American maids, managed to get his ear after many rebuffs in San Francisco shipping circles. For these girls had determined to go out as Midshipmen on the last voyage of the sailing ship, which took her from Vancouver to New Caledonia, there to be demoted to a mere storage barge. A tragedy indeed! As official keeper of the ship's log and journal, Miss Cooper set down a record of this unique two months' voyage which is an enchanting and thrilling tale of the sea. Being fact and not fiction, "Windjamming to Fiji" contents itself with the thousand and one delights of an old-fashioned sailing ship. There is drama in the squall - which did not wreck the ship - there is comedy in the cannibal cook, and there are magic beauty in the dawn and tantalizing thrills in deep-sea fishing. In short, "Windjamming to Fiji" is an epitome of the romance of the sea as it reveals itself to a girl who loves it and who has the gift of making her unusual experience delightful reading." (from the dj). Cloth very slightly soiled, bookplate, else very good in rubbed, nicked dustjacket. 90.00