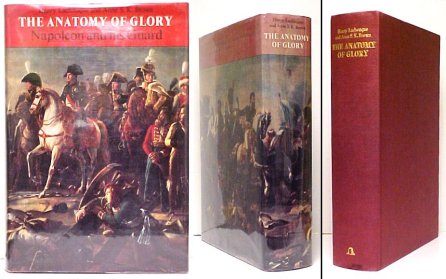 LACHOUQUE, Henry. The Anatomy of Glory [dj adds: Napoleon and his Guard]. Adapted from the French of Henry Lachouque by Anne S.K. Brown, with a new introduction by David G. Chandler. L: Arms and Armour Press, (1978). Third Edition . Pp. 564 with 173 plates (including 86 in full colour) and one folding map at rear. Large 8vo, red cloth. Henry Lachouque is considered to be France's foremost historian of the Napoleonic Wars. " The glory of the Imperial Guard resounds above all others in the annals of war. Created, built and nurtured as a bodyguard for Napolean, it grew from a brigade of less thantwo thousand men into a virtual army and became 'a human fortess which no one but he could dominate and no army could penetrate'. And on such battlefields as Austerlitz, Jena, Friedland, Wagram and Waterloo, it won the laurels of undying fame"-- from the dj. Vg in spine faded dj. 100.00