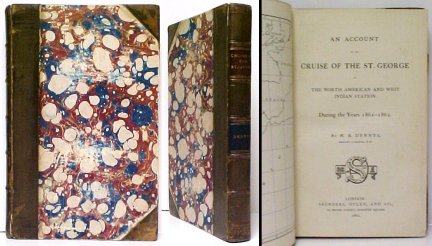 DENNYS, N.B. An Account of the Cruise of the St George on the North American and West Indian Station During the Years 1861-1862. London: Saunders, Otley, and Co., 1862. First Edition. Pp xi, 267, folding map frontispiece., one plate leaf (opposite p.95). 8vo, orig. half calf with raised bands and marbled boards. Sabin 19602, Hallett, Bermuda in Print (2nd. ed) p.69. Not inTPL or Lande. The author describes his impressions of the voyage on which H.R.H. Prince Alfred was a midshipman, visiting most of the West India islands with good cameo descriptions. The heart of the book consists of the author's getlemanly appreciations of Nova Scotia- Ship Harbour, Arichat, Louisbourg, Sydney- and especially of Halifax. His lively accounts of inter-shipboat races, of cricket between the officers of the St. George and those of the garrison, of his crewmates' amateur theatricals at the "Theatre Royal Spring Gardens", present a vivid portrait of a high-Victorian provincial culture; and one, apparently, of some notoriety: "It is astonishing how many naval and military officers get caught in the matrimonial noose at Halifax.But allow me to give one warning- They are all cousins; so beware what you say...." With numerous interesting diversions, including one on the severa l methods of lobster-catching employed by the ladies of the town. Uncommon.Rubbed with slight wear to extremities, one inch splits to head and tail o f outer hinges, feps slightly discoloured, tiny nick to fold of frontispiece, else very good. 1500.00

Title: Account of the Cruise of the St George on the North American and West Indian Station During the Years 1861-1862