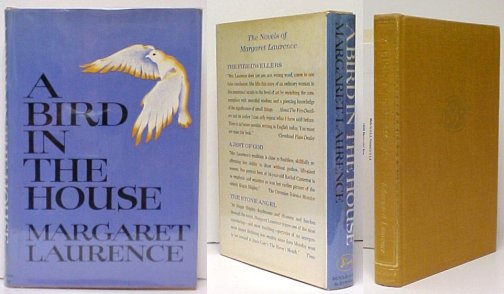 A Bird in the House: Stories. First Canadian Edition in dustjacket

Jean Margaret Laurence, CC (née Wemyss) (b. July 18, 1926, Neepawa, Manitoba – d. January 5, 1987, Selwyn, Ontario) was a Canadian novelist and short story writer, and is one of the major figures in Canadian literature.

"With the wonderful amalgam of strength and sensibility that has distinguished her novels, Margaret Laurence gives us in these interlocking stories the emotionally charged moments of attachment to others or rebellion acrainst them through which a woman remembers herself as a girl.

Vanessa MacLeod (at eight she was writing romances by flashlight under the bedcovers) here recaptures her childhood — each episode colored by, and in memory bound to, a member of her family. She summons them up in turn: her pioneer Grandfather Connor, remembered still as the awesome voice of righteousness, the scourge of cardplayer, drinker, smoker, chewer, and young person caught overstepping the mark; her family-proud Scots grandmother, so painfully present in the frightening hours when the new baby came; her tough-minded Aunt Edna, the maverick grownup, secretly commnicatinig strength and confidence to the maverick child; her father, the generous, overworked G.P. suddenly gone, killed by the flu epidemic — and only her mother's quiet strength slowly bringing the tottering world back into balance.

With a directness and simplicity that move and stir our own memories, the author of The Fire-Dwellers and A Jest of God makes felt the vulnerability of childhood, and the effects of place (a small town in Manitoba), of time (the Depression thirties), and of close-knit family upon the heart-breaking joyous process of growing up." (from the dj).

Includes the following stories:
"The Sound of the Singing",
"To Set Our House In Order",
"Mask of the Bear",
"A Bird in the House",
"The Loons",
"Horses of the Night",
"The Half-Husky", and
"Jericho's Brick Battlements".

The lighest of brown-spotting to top edge, minor sunning to cloth edges, else very good in a very good unclipped dustjacket. 175.00

Title: A Bird in the House: Stories. First Canadian Edition in dustjacket

A Bird in the House: Stories. First Canadian Edition in dustjacket