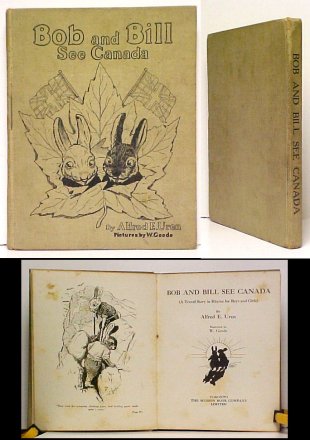 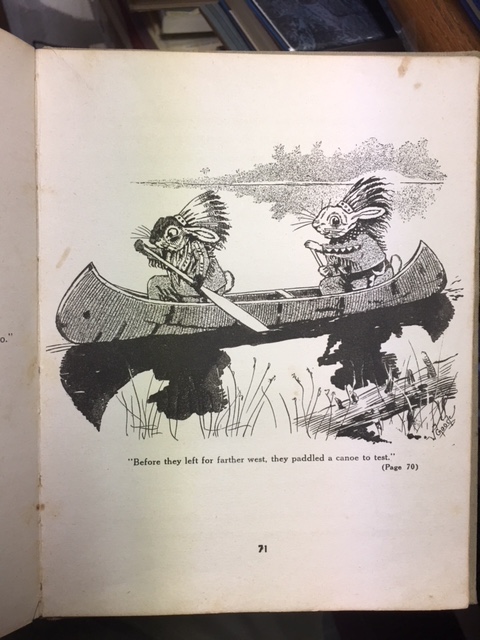 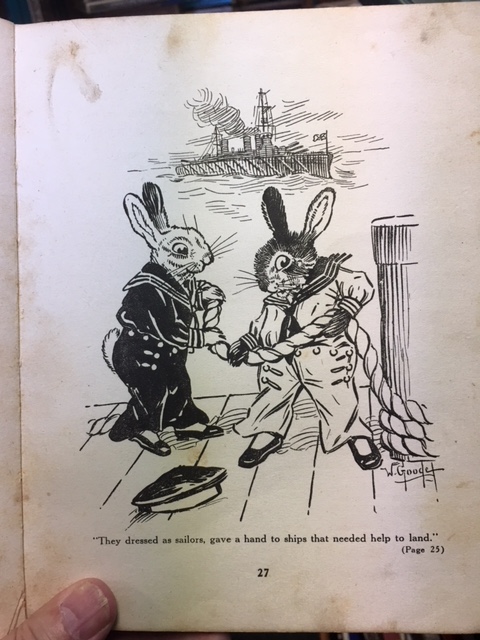 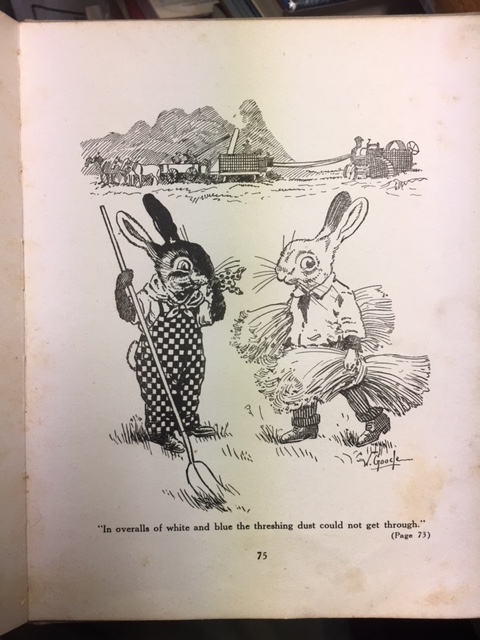 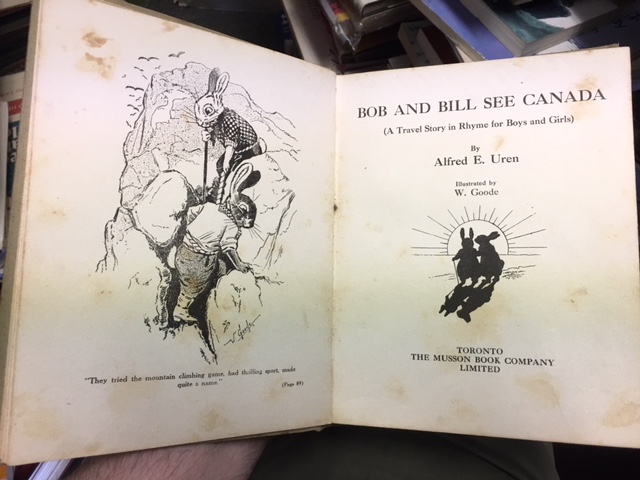 Bob and Bill See Canada: A Travel Story in Rhyme for Boys and Girls. First Edition

"Two intelligent and exceptionally human rabbits, named Bob and Bill, growing tired of the monotonous life they were living among their native haunts in a Nova Scotia forest, decide to tour Canada from Coast to Coast. Bob, who is white, is of a thoughtful turn of mind, while Bill, his black companion, sees the humorous side of life.

After making plans carefully for the long journey, they start off one bright Spring day, calling first at the City of Halifax. Thev tour each Province of the Dominion in turn, visiting the various cities, but  because of limited time find it impossible to stop at the scores of large and growing towns along the route. They see the sights of greatest interest and in their diaries tell of the many wonders of the country. They take special pleasure in acquainting themselves with Canada's leading industries.

Bob and Bill complete their tour late in the Fall, returning to Banff and Rocky Mountain Park, Alta., where, in the midst of the natural grandeur, Government Officials have erected a cozy bungalow for them, to be used as their headauarters. In return for this courtesy the rabbits assist in the work of superintending the park. In their mountain home they enjoy a well-earned rest while they complete diaries of their travels and make further plans for the future. " - Synopsis.

Two wise young rabbits - Bob and Bill - lived in a brushpile on a hill
Beside a Nova Scotia wood. Most everything they understood.
Bob was as white as he could be, of thoughtful disposition he,
While Bill was black and always tried to see the most amusing side.
"Let's break away without delay from these old haunts," said Bob one day.
"We now are young and full of vim, and surely in the best of trim
To see fair Canada far and wide from Atlantic shore to Pacific tide.
From farthest north to the U.S.A., we'll see the sights along the way,
And diaries write with our opinion of the very best in the Dominion -
No grander spot the whole world round - a better country can't be found."

Pp 25 and 26 record a preliminary tour of their native province.
In Halifax :

They saw boats here of every size all weighed low with merchandize,

And heard their whistles loud and shrill; 'twas all so new to Bob and Bill.
They dressed as sailors, gave a hand to ships that needed help to land.
[this line is illustrated by a full-page drawing (p.27) of the rope-handling rabbits on a wharf by a bollard with a warship in the background]

And in a very short time knew each officer and all the crew.
The towering citadel they spied and distant Islands fortified,
This harbor grand, with traffic filled, took many years to plan and build.

A jolly Captain going to sea found out that Bob and Bill were free,
So took then for an Ocean cruise and told them all the Navy news -
How ships used camouflage for fear some stealthy submarines were near,
And how torpedoes were propelled and how the enemy was shelled.
He sent a wireless ashore to say that they would be back at four.
The rabbits entertained the crowd; the sailors laughed both long and loud
To see them climb a rope or mast, then lose their hold and slide down fast.
With other antics of such form they simply took the crew by storm,
And when they left, the sailors' cheers were such they had to hold their ears.

[After a circuit of Nova Scotia]

They heard the Eastern fishing folk narrate sea stories, tell some joke,
Of lobsters red with claws and tails, of porpoises and sharks and whales,
And storms encountered miles from shore, that broke their masts and rigging tore.
These seamen told of ways and means of netting haddock, cod, sardines,
And salmon, halibut - all fish that make a tasty dish.
A fishing fleet brought in a "catch" - so Bob and Bill helped sort a batch, [illustrated on p.31]
And dressed the herrings in a trice, then put them carefully on ice.

They avoid P.E.I. (for fear of foxes), and instead visit Moncton, the port of Saint John, have a one-line statement of Pre-Confederation Newfoundland ("where fishermen are born and bred"), before heading to Quebec and points west.

Bob and Bill See Canada: A Travel Story in Rhyme for Boys and Girls. First Edition