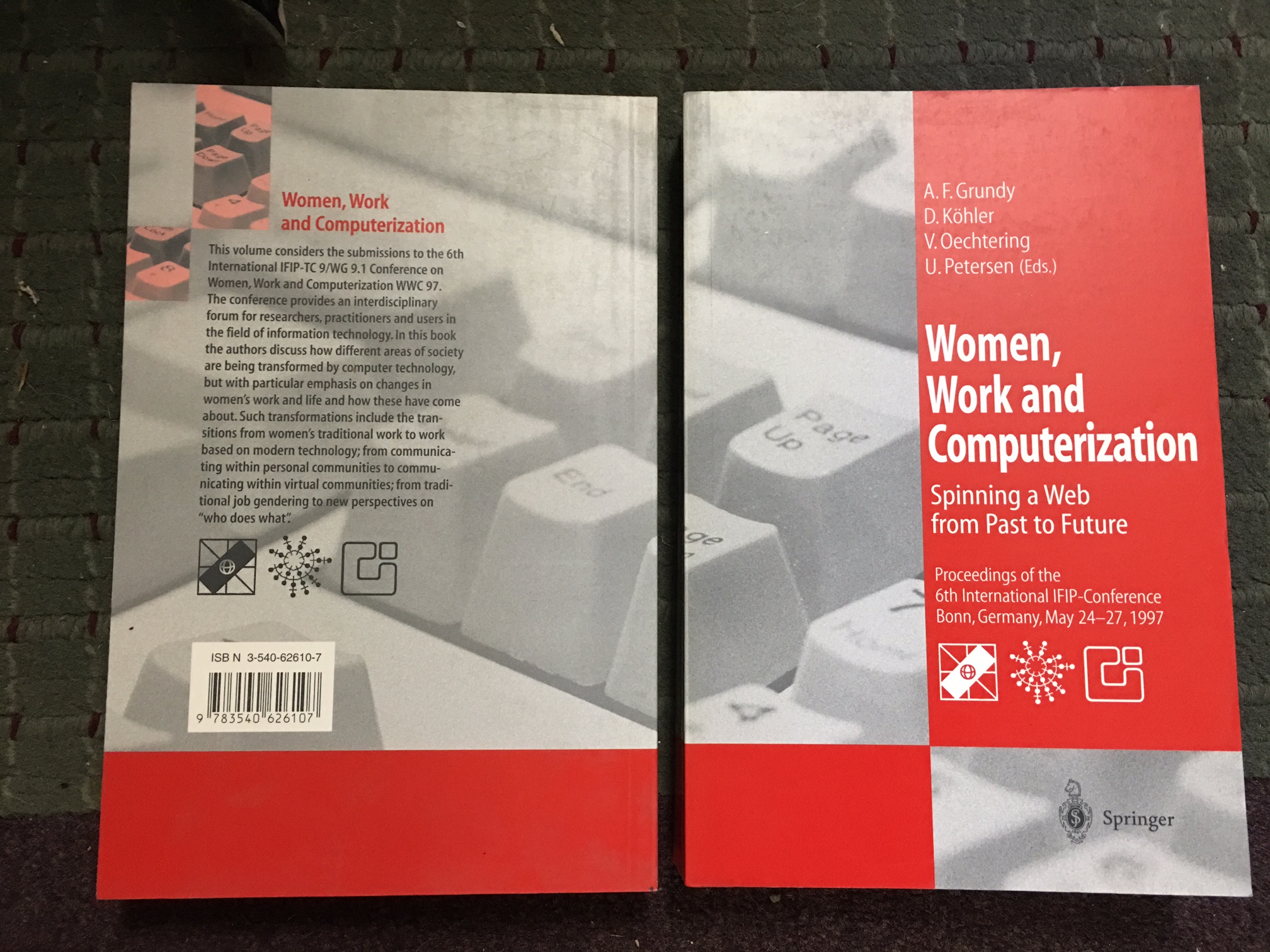 Women, Work and Computerization : Spinning a Web from Past to Future: Proceedings of the 6th International IFIP-Conference Bonn

"This volume considers the submissions to the 6th International IFIP-TC 9 / WG 9.1 Conference on Women, Work and Computerization WWC 97. The conference provides an interdisciplinary forum for researchers, practitioners and users in the field of information technology. In this book the authors discuss how different areas of society are being transformed by computer technology, but with particular emphasis on changes in women's work and life and how these have come about. Such transformations include the transitions from women's traditional work to work based on modern technology; from communicating within personal communities to communicating within virtual communities; from traditional job gendering to new perspectives on 'who does what'". - from rear cover.

"Along the Estuary" by Carolyn Guyer;

" Remembering the Future: Language, Webs, and the Power of the Invisible" by Allucquere Rosanne Stone;

"Social and Cultural Challenges of the Information Society : Politics of the European Union" by Karin Junker';

"Saving Our Children? : The Promise of the Internet and the Perils of Censorship" by Marsha Woodbury;

"Privacy and the Internet: Only a Woman's Concern?" by Martina Schollmeyer, Linda Janz and Urs Gattiker;

"Woman's Worm's-Eye View of the Information Society" by Christel Kumbruck;

"Sex, Age and the Desirability of Computers" by David Foreman, Frances Grundy and Sue Lees;

"Access to the Internet for Women's Groups Across Canada" (pp. 113-122) by Leslie Regan Shade;


"IT EQUATE : Through the Web and Internet" by Christine Whitehouse, Gillian Lovegrove and Sue Williams;

"What you see is what you get: Cyberchix and Virtual Systers" by Sue Myburgh;

"Moral Order of an Information System" by Sarah Willis;

"Giving Room to Femininity in Informatics Education" by Cecile Crutzen;

"How to Prove it" by Brigitte Pientka;

"Exploring the Excluded. A Feminist Approach to Opening New Perspectives in Computer Science" by Ulrike Erb;

"To be in Touch or not? Some Remarks on Communication in Virtual Environments" by Barbara Becker;

"Physical Body in Cyberspace: At the Edge of Extinction?" by Kerstin Dautenhahn;

"Body Language Without the Body: Situating Social Cues in the Virtual World" by Judith Donath;

"Flying Through Walls and Virtual Drunkenness: Disembodiment in Cyberspace?" by Gloria Mark;

"Between Deconstruction and Construction: Contradictory Body Experiences in the Development of Software" by Christina Schachtner;

"Formation of the "Global Office": Women and the Globalization of Information Labour" by Stana Martin;

"Women and Computer Technology in the Banking Industry: An Empirical Example from Nigeria" by Bimbo Soriyan, Bisi Aina and Tanwa Odebiyi;

"What is our Worth?" by Eva Turner;

"Factors that Attract Women to Careers in Information Technology: A Case Study of Women in Ireland" by Therese Rafferty ;

"'And it's a Generalisation. But no it's not': Women, Communicative Work and the Discourses of Technology Design" by Toni Robertson;

"Resources of the Productive Office - Women's and Men's Opinions on Telematics and Intelligent Building Features" by Mervi Lehto;

"Who is in Control? Canadian Experiences in Teleworking" by Crystal Fulton;

"Telecommunication : A Woman's Friend or Foe" by Caroline St. Clair;

"Change and Continuity: Transformations in the Gendered Division of Labour in a Context of Technological and Organizational Change" by Diane-Gabrielle Tremblay;

"Technology Structuration: A Research Paradigma for a Gender Perspective on Technology?" by Sigrid Wubker and Beatrice Sigrist;

"Making Other Futures: Professional Women and their I.T. at Work" by Zena Cumberpatch;

"New Technology and its Impact on Female Labour Force in Russia" by Vitalina Koval;

"Notes on Gendered Experiences in Fieldwork Related to a Teleradiology Experiment" by Helena Karasti ;

"Introducing Point of Sale Technology in a Retail Chain Store: Voices from the Checkout Counter" by Martha L. Nangalama and Andrew Clement ;

"Why has Female Participation in German Informatics Decreased?" by Britta Schinzel;

"Girls and Computer Science: 'It's not me. I'm not Interested in Sitting Behind a Machine all day." by Bente Rasmussen;

"Australian Women in IT Education: Multiple Meanings and Multiculturalism" by A. Greenhill, L. von Hellens and S. Nielsen;

"Use of Quality Function Deployment to develop Women's Studies Strategy" by Ita Richardson;

"Do the Promises Made by the new Technologies Fulfil Women's Educational and Employment Needs?" by D. M. Thompson and G. R. Homer;

"Construction of the von Neumann - Concept as Constituent for Technical and Organical Computers" by Heike Stach;

"Gender and Expertise in Retrospect: Pioneers of Computing in Finland" by Marja Vehvilainen;

"Gender Segregation in IT Occupations" by Kea Tijdens;

"Coming of the 3rd Industrial Revolution: Will Women Again be Relegated to Service Positions?" by Renee Blake and Sigrid Mueller;

"Women and Education in Information Technology" by Daisy C. Jiang;

"T4: Telework: The First Step to the Virtual Company. Consequences for the Employment of Women and their Lives / Birgit Godehardt, Cornelia Brandt and Illeana Hamburg;

"T5: Working Towards the Integration of Women: New Forms of Work and the Use of New Information and Communication technologies in Production" by Eileen Green, Alison Adam and Peter Brodner;

Women's group at the GMD.

Title: Women, Work and Computerization : Spinning a Web from Past to Future: Proceedings of the 6th International IFIP-Conference Bonn

Women, Work and Computerization : Spinning a Web from Past to Future: Proceedings of the 6th International IFIP-Conference Bonn