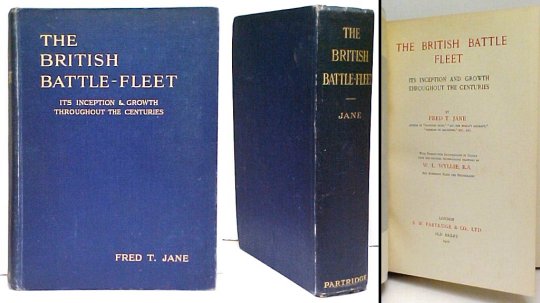 JANE, Fred T. The British Battle Fleet : Its Inception and Growth throughout the Centuries. With Twenty-Five Illustrations in Colour from the Original Water-Colour Drawings by W.L. Wylie. L: S.W. Partridge & Co., 1912. Pp 406, frontis., [50] leaves plates. 8vo, ribbed blue cloth, gilt to front and spine. A very nice copy of Jane's classic technical history of the Royal Navy: "This book is not intended to be a 'history' of the British Navy in the generally accepted sense of the term. For this reason small space is devoted to various strategical and tactical matters of the past which generally bulk largely in more regular 'naval histories'- of which a sufficiency already exist. ...In such histories primary interest naturally attaches to what the admirals did with the ships provided for them. Here I have sought rather to deal with how the ships came to be provided, and how they were developed from the crude warships of the past to the intricate and complicated machines of to-day; and the strictly 'history' part of the book is compressed with that idea principally in view. The 'live end' of naval construction is necessarily that which directly or indirectly concerns the ships of our own time. The warships of the past are of special interest in so far as they were steps to the warships of to-day; but, outside that, practical interest seems confined to what led to these 'steps' being what they were." -from the Preface. Rubbed with slight wear to extremities, eps discoloured, top edge a bit dusty, owner's signature, else vg. 300.00