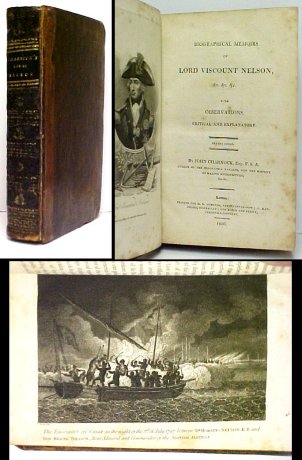 (NELSON, Horatio). CHARNOCK, John. Biographical Memoirs of Lord Viscount Nelson with Observations, Critical and Explanatory, by John Charnock. London : Printed for H.D. Symonds, 1806. Pp [2], (i)-xviii, (1)-429, [1], (1)-79 of appendix, [1], (1)-32 of ads, [2], + portrait frontispiece. 8vo, full calf. Cf. Cowie 129. A revised edition of a work originally published in the wake of the Battle of Copenhagen, updated to include Nelson's apotheosis at Trafalgar. Charnock was a naval volunteer, and his work is based largely onletters he had collected for a general naval history, many of which were s upplied by Captain William Locker. Rebacked, with new endpapers, outer margins of pp 153-179 have been professionally repaired with no loss, wear to front corners and spine ends, occasional light foxing, thumbing to a few pages, else very good. 1,200.00