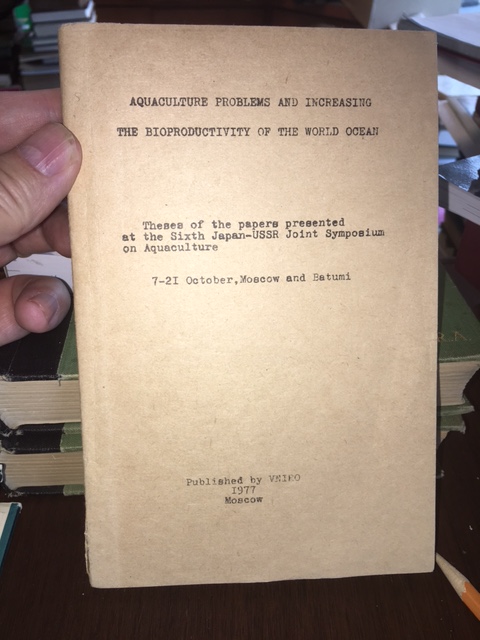 Aquaculture Problems and Increasing the Bioproductivity of the World Ocean

"Direction and Methods of Selection and Creation of Bester Breeding Flocks" by I.A. Burtsov

"Some Features of Striped Mullet Males' Reproductive System in the Black Sea" by L.D. Bolkvadze

"Common Bass as a Good Object for Aquaculture" by R.A. Garaev et al

"State and Prospects of Commercial Fish Culture in the Eastern Part of the Baltic Sea" by M.L. Kangur and O.O. Leino

"Trophic Necessities of the Sea Cucumber larvae in the Cultivation" by N.D. Mokretsova

"Oil Pollution and Mariculture Problems of the South-east Part of the Black Sea" by N.D. Mazmanidy

"The Feeding of Black Sea Oysters in relation to their Culture " by T.F. Kraskatitza L.V. Specktorova

"Prospects of Development of Aquatic Culture in the Azov" by L.I. Semenenko, K.S. Proskurina, and many other papers.

Some occasional inked lines to margins, two small chips to front fore-edge, faint creasing to front, else very good. NOTE: Shipping should be less for this slim item. 35.00

Title: Aquaculture Problems and Increasing the Bioproductivity of the World Ocean

Aquaculture Problems and Increasing the Bioproductivity of the World Ocean