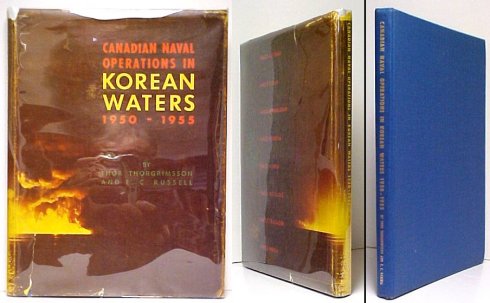 "For three full years and more, the Korean "police action"— a war in all but name — raged throughout the length and breadth of that unhappy country known to it people as the Land of the Morning Calm.

For three years a division of Canadian destroyers served with the naval forces of the United Nations, engaging in what was undoubtedly one of the most unusual naval campaigns in history — a campaign in which the ships of the UN never even sighted an enemy craft worthy of the name of warship

This book tells the story of the Canadian destroyers in this peculiar war and d escribes how they duelled with the sharp-shooting Chinese gunners of Amgak and Wonsan; how they shepherded fleets of little wooden junks and sampans filled with wild guerillas, going raiding in the ancient Viking fashion; howt hey bore aid and succour to starving Korean islanders whose livelihood ha d been destroyed by war. It describes the monotony of interminable carrier-screening missions and the excitement of hazardous blockade or island-defence patrols carried out in blinding snow squalls and biting winds among the rocky shoals and mud banks of the Korean west coast.

This book tells, too, how one of Canada's destroyers won Task Force 95's coveted "Trainbusting Championship" in competition with the ships of all the United Nations and how another Canadian ship, in a more mundane sphere, won yet another champions hip in the "Yellow Sea Fuelling Stakes."

The story of Canada's navy in Korea is the theme of the book, but the broader history of the war is not forgotten. The epic struggles on land, in the air and at the conference table, and the effects of these struggles on the naval war, are kept before the reader throughout". - from the dj

Contents :
Preface; Bibliographical Notes;
1. "Three Ships West" [HMCS Sioux, Athabaskan and Cayuga];
2. From Pusan to the Yalu;
3. The Chinese Intervention;
4. Stopping the Chinese;
5. Offensive and Counter Offensive Ashore;
6. The Island Campaign Begins;
7. Defending the "Friendly Islands";
8. Mainly in the Haeju-Man;
9. Stalemate on the "Island Front";
10. "Trainbusting" on the East Coast;
11. The Uneasy Truce.

Appendices:
A. Organization, Administration and Supply of the RCN Destroyers in the Korean Theatre;
B. Senior Officers of the Canadian Destroyers in the Far East, 1950-1955;
C. Service of HMC Ships in Korean Waters;
D. Honours and Awards for Services by Officers and Men of the Royal Canadian Navy in the Korean Theatre, 1950-1955;
E. The Command Organization, UN Naval Forces, Korea, 19 February to 3 April 1951;
F. The Command Organization, UN Naval Forces, Korea, 10 April 1951;
G. Organization of Task Group 95.1 on the West Coast of Korea, Effective 1 January 1953;
H. Bibliography;
I. Diagram - Periods of Service of HMC Destroyers in Korea Waters;
J. Glossary of Technical terms and Abbreviations. With index.