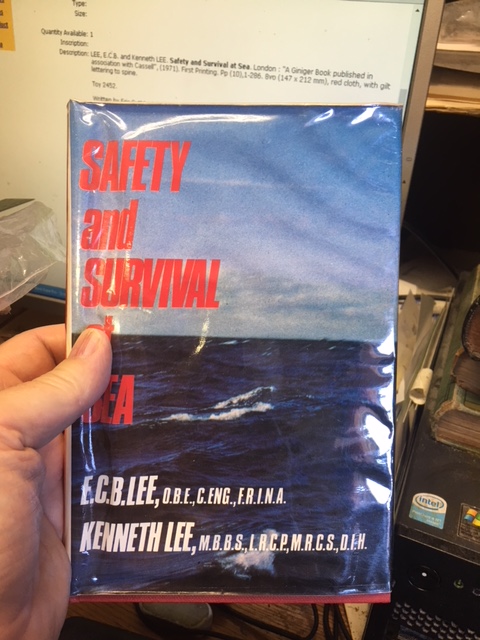 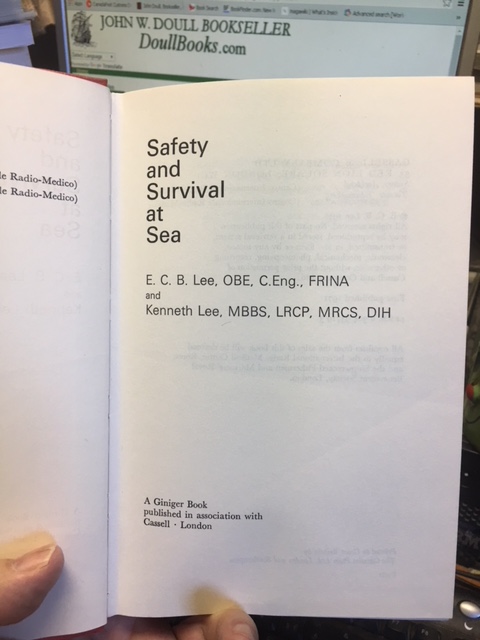 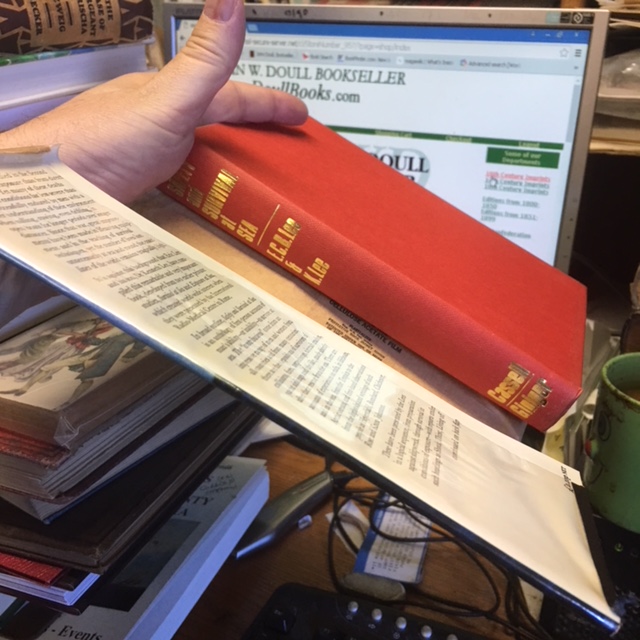 Safety and Survival at Sea. First Edition in dustjacket

Written by Eric Cuthbert Bernard Lee, O.B.E., C.Eng., F.R.I.N.A. (a former naval officer and for many years the secretary of the Royal Naval Life Saving Committee ) and his son, Kenneth Lee, MBBS, LRCP.MRCS, DIH. (b. 1944).

"More British seaman died in the Second World War from exposure than from direct enemy action. Yet many of these deaths occured in conditions far less severe than those successfully endured by men with a better understanding of their environment when sailing, rowing, even drifting, in open boats for longer periods over longer distances. Since that war, gret improvements have been made in lifesaving equipment and in the teching of survival techniques, yet the number of lives lost unneccessarily at sea and round the coastlines of the wotrld remains tragically high.

It is against this background that Eric Lee and his son, Dr. Kenneth lee, have compiled this remarkable and very important book, developed from two earlier private studies, Survival at Sea and Exposure at Sea, which created world-wide interest when presented by the International radio-Medical Centre in Rome.

In broad outline, Safety and Survival at Sea is an anthology of first-person accounts of man's ability - or inability - to survive at Sea. The 'contributions' come from an impressive range of men and women from all countries and from many centuries; there are the depositions of survivors of collisions, fires, torpedoings, aircraft crashes, yacht sinkings and the like, made shortly after their rescue from the sea. There are accounts of experiences on rafts, in lifeboats, and in the sea. from the Tropics to the Arctic oceans, and first-hand observations from the logbooks and writings of such people as Heyerdahl, Bombard, Chichester, Rose and Knox-Johnston." from the jacket.

Title: Safety and Survival at Sea. First Edition in dustjacket

Safety and Survival at Sea. First Edition in dustjacket