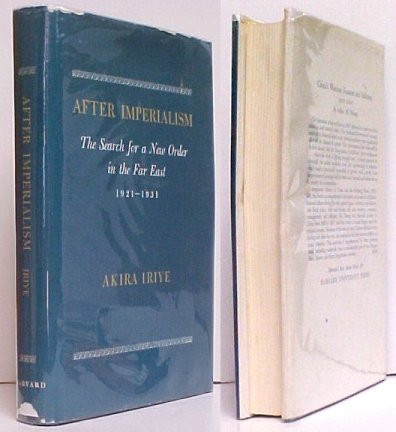 After Imperialism : The Search for a New Order in the Far East 1921-1931.First Edition in dustjacket

"This is the first extensive and systematic study of Far Eastern international relations from the time of the Washington Conference (1921-1922) to the Manchurian Crisis (1931). Contradicting the usual generalizations about internationalism, Japanese militansm, Chinese nationalism, and other concepts, the author shows that the period can be studied at two levels: concrete components of individual governments' foreign policies, and the over-all framework of international relations. His sources include material from the Chinese and Japanese Foreign Ministry Archives which has never before been orrelated, and documents in English, German, Russian, Chinese, and Japanese, previously used only sporadically or in isolation.

As World War I destroyed the old mechanism of imperialist power politics, the United States, Britain, Japan, and others sought to reorient their foreign policies to promote a new basis for stability in the Far East. The Washington Conference powers tried to bring about a new era of economic foreign policy, but their efforts were frustrated by the Soviet diplomatic offensive. This necessitated another reorientation in the governments' policies, but in the end China proved the most important agent of change, looking; toward the establishment of yet another new order in the Far East." - from the dj.

Title: After Imperialism : The Search for a New Order in the Far East 1921-1931.First Edition in dustjacket

After Imperialism : The Search for a New Order in the Far East 1921-1931.First Edition in dustjacket