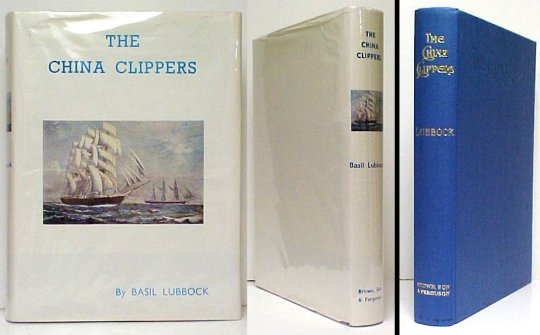 LUBBOCK, Basil. The China Clippers ; with illustrations and plans. Glasgow:Brown, Son & Ferguson, Ltd., Nautical Publishers, (1968). 1st ed 1919 ; 2n d ed 1946 ; repr 1967, 1968. Pp. 295, frontis., + 26 leaves of plates (4 ofwhich are folding). Large 8vo, blue cloth with gilt lettering to spine. "T he history of the celebrated clipper ships in the Chinese opium and tea trades. Many of the incidents relating to the great tea races, typhoons, shipwrecks, etc., and the fine performances of seamanship and daring navigation,have been gathered from the men who participated in them. Here is an accou nt of the Chinese opium trade and the clippers engaged in this risky, but lucrative traffic. Then the wonderful American clippers, which in the forties threatened the supremacy of Great Britain as the carrier of the world." -from the dj. Includes many illustrations and plans. Vg in slightly wrinkle d, nicked dj. 85.00