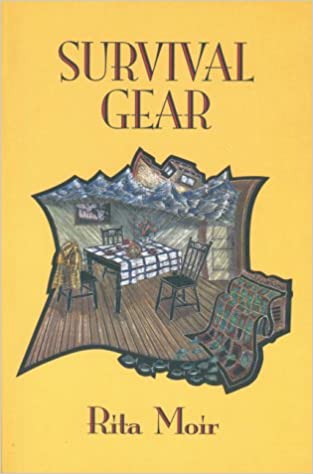 Rita Moir (b. January 17, 1952, Minnesota) first arrived in Canada at Brandon, Manitoba in 1966 and was living in Vallican, British Columbia at the time of publication.

This is her first book, a collection of stories with many on the people and places in and around Freeport, Digby County, Nova Scotia.

"Survival gear refers to the cold-water suit that can keep you alive for hours in the freezing waters of the Atlantic or Pacific. But in the fishing community of Freeport, Nova Scotia and in her journeys across Canada Rita Moir comes to understand that survival gear can take many forms." .

"Rita Moir's stories are poetry masquerading as prose, pictures pretending to be words. With an unerring ear for dialogue and a loving eye for observation and detail, she has captured the essence of a Nova Scotian coastal community and the people who live there. Each small story is a gem." - Sharon Fraser, on the rear cover.

"My home is in British Columbia."
"I am determined not to save potato water."
"Tips to travellers crossing Canada by car in winter."
"God damn you Connie Kaldor, Garnet Rogers you make me cry."
"Grazyna's pickles."
"Pink and prairie morning."
"Brenda."
"Cross the median."
"Arrival."
"The rat and chickens story."
"If I could save time in a bottle."
"Grass fires."
"The best people have their fingers cut off."
"Bad days, swell days."
"Ozone scare."
"Survival gear"
"Cultivator."
"Christmas in Freeport."
"The day the ceiling fell in."
"Unfit."
"Recipe for a winter night."
"Letters home."
"I'd like to give you the weather network for your birthday."

"If I had a baby, I'd name her Edwina, or Caroline." [referring to the book's dedicatees]

"Loaves and fishes."
"Chainsaw."
"This dog a Newfoundland?"
"Men must work and women must weep."
"Quilt of fish."
"The gulls sing a different song in spring."
"Recipe for a compost heap."
"Ranch romance."
"We are not sentimental, because this is food."

Small gift inscription on inside front cover, else very good. Signed, without inscription, by the author on the title page. 30.00