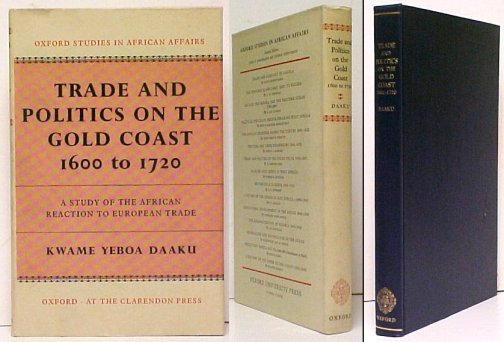 Trade and Politics on the Gold Coast, 1600 to 1720 : A Study of the AfricanReaction to European Trade

DAAKU, Kwame Yeboa. Trade and Politics on the Gold Coast, 1600 to 1720 : A Study of the African Reaction to European Trade . Oxford: at the Clarendon Press, (1970). Pp. [i]-xviii,[1]-219,(3). Illustrated with maps. 8vo, blue cloth with gilt lettering to spine. A volume in the Oxford Studies in African Affairs series. A survey of the mad dash by European powers to gain influence, prestige and riches from the aptly-named Gold Coast of western Africa, encompassing present-day Ghana, Benin, and Togo, among other countries. A source of wealth and power to endeavouring individuals from Portugal, England, France, Holland, Denmark, and numerous other European states, resources of the region were actively sought after, and control of the riches laidbeneath the surface were fought over by various European powers. After the gold source had been exhausted, the attentions of the enterprising Europea n merchantmen turned to control of the African people themselves, as the Slave Coast expanded eastward. This volume focuses on the socio-political andeconomic ramifications increased contact with the Europeans had on the peo ple of the west-African coast. Top edge a bit dusty, name to ffep, else vg in nicked dj. 200.00

Title: Trade and Politics on the Gold Coast, 1600 to 1720 : A Study of the AfricanReaction to European Trade

Trade and Politics on the Gold Coast, 1600 to 1720 : A Study of the AfricanReaction to European Trade