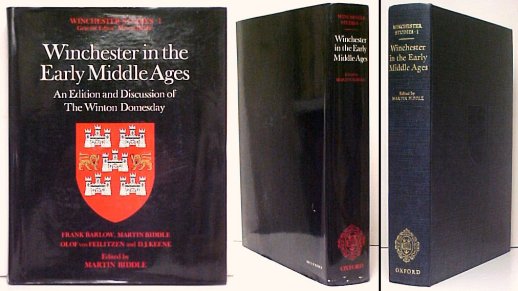 Winchester in the Early Middle Ages : An Edition and Discussion of the Winton Domesday. in dj.

BARLOW, Frank, Martin BIDDLE, Olof von FEILITZEN and D.J. KEENE. Winchesterin the Early Middle Ages : An Edition and Discussion of the Winton Domesda y . By Frank Barlow, Martin Biddle, Olof von Feilitzen, and D.J. Keene, with contributions by T.J. Brown, H.M. Nixon, and Francis Wormald. Edited by Martin Biddle. Oxford: at the Clarendon Press, 1976. Pp. [i]-xxxi,(3),1-612,(2), frontis., + 11 p. of maps and charts (most of which are folding) and 11 p. of plates at rear. Illustrated. 4to, navy blue cloth with gilt lettering to spine. Winchester Studies, volume 1. (General editor: Martin Biddle).London and Winchester were not described in the Domesday Book, but the roy al properties in Winchester were surveyed for Henry I about 1110 and the whole ity was surveyed for Bishop Henry of Blois in 1148. In this book a teamof scholars from Britain and Sweden, centred on the Winchester Research Un it, have undertaken a full edition, translation and analysis of the surveysand of the city they depict. Drawing on the evidence derived from archaeol gical excavation and historical research in the city since 1961, on personal- and place-name evidence, and on therecent advances in Anglo-Saxon numismatics, they provide an unparalleled acount of one of the principal Europeancities of the eleventh and twelfth centuries." - from the dj. Vg in price- clipped dj. 100.00

Title: Winchester in the Early Middle Ages : An Edition and Discussion of the Winton Domesday. in dj.

Winchester in the Early Middle Ages : An Edition and Discussion of the Winton Domesday. in dj.