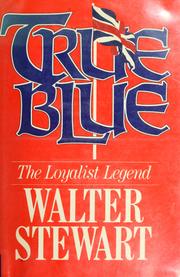 STEWART, Walter. True Blue : The Loyalist Legend. Toronto : Collins, (1985). First Edition. Pp (10),[1]-275,(3). Map. 8vo, blue cloth, silver lettering to spine. Walter Douglas Stewart (b. April 19, 1931, Toronto – d. September 15, 2004, Sturgeon Point, Kawartha Lakes, Ontario) Canadian journalist and author. "The coming of the Loyalists was the pivotal event in Canadian history -- the end of childhood, the commencement of building a nation. It was the equivalent of the Norman Invasion of England in 1066, but even more potent, because in much of the country, the invaders were in the majority. Today some 3.5 million Canadians are descendents of the original Loyalists.In 'True Blue', Walter Stewart challenges the traditional vision, absorbed in history classes, of Loyalists as tea-drinking, God-fearing, king-suppor ting, tree-hacking pioneers. While Stewart does introduce Loyalists who, inpart, fit that vision, you will also meet far more who do not: Loyalists w ho were rogues, thieves, snobs, savages, slaves, proud warriors and pompousasses, as well as Loyalists who would not have known King George if they h ad met him at a garden party." - from the dust jacket. Contents: Introduction : Let This Be Our Bond: To Hell with the Yankees; Arranged in four sections: Section I. Blows Must Decide : 1763 - 1775. 1. The Mob Comes to Call; 2. Heating Up the Tar; 3. The Rocky Road to Lexington; Section II. The Civil War: 1775-1783. 4. Low, Private Revenge; 5. Tomahawk Tories; 6. It's Damned Unfair, Damned Unfair; 7. Vindictive Victory; Section III. The Most Inhospitable Clime : 1783-1791. 8. The Great Migration; 9. Struggles and Squabbles; 10. Betrayal of the Blacks [pp.155-168] : They Bolted for Freedom fromthe Sons of Liberty - Mary Was Sold for One Hundred Bushels of Potatoes - Negro Frolicks Were against the Law - Birchtown Opts for Sierra Leone [Birchtown, Shelburne County, &c], ; 11. Refugees Into Settlers; 12. Simcoe's Dream. Section IV. The Ex-Privileged : 1791. 13. Settling In; 14. Settling Up; 15. Peculiar Attention; 16. Winners After All. With end notes and index. Very good in spine-sunned dustjacket. 25.00